You know that bit in the Fisher King… (yes I know nobody watches the serious Robin Williams films anymore but you MUST have seen this one)… you know that bit where the lonely office worker lady says to Robin “Are you real?” because he’s being the sort of lovely, dreamy boyfriend everyone wants.

On top of this admirable tendency to show mercy, Allan seems to understand what he’s watching and can precis it without boxing it or giving the game away. Of Twonkey’s Christmas in the Jungle he says: “Everything is fitting to a plan”, although “the plan might be written in green crayon on the side of teapot”. It’s nice when reviewers can review in the spirit of the thing they’re seeing without, you know, going a bit dickish with it like every lame duffer who has reviewed Austentatious in the style of Jane Austen.

He’s an odd fish though. His biog states that the press call him “The Godfather of Scottish cabaret”… hmm. Well he’s certainly a lot more Gambino when he reviews his chosen genre. In fact there are some cabaret show ponies who get their heads cut off. But for some reason he goes nice and easy with pretty much every bit of comedy he sees. Is it because he doesn’t take it seriously? Is comedy a bit of a review-holiday for him? Frodo, are you real?

Like a lot of Broadway Baby reviewers since it left the constraints of of print, Allan can be a bit verbose – for example taking 75 words to tell us a Mulholland routine was a bit near-the-knuckle. He also needs to read his stuff through. He tells us twice that he was gutted that he didn’t have enough cash to buy Juan Vesuvius’s mixtape after the show. (Maybe he wants us to take the hint and buy it for him?) He also writes “The angry comedian is a common trope these days and Mulholland is brilliantly pissed-off at the world” twice. It seems that Allan likes to write in pithy sentences and then move his favourite one to the end as a conclusion, but does a copy-paste instead of a cut-paste. I’m guessing. In any case he needs to edit his own stuff because I’m sure the only thing the editors of Broadway Baby ever check is their Snapchat and the wet patch behind their ears. 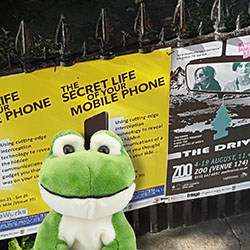