Fiona Shepherd is rock and pop reviewer for The Scotsman, but they let her write about comedy too because everyone is multitasking at Scotsman Towers these days. Jay Richardson makes sandwiches in the canteen. Joyce Macmillan maintains the drawbridge and the boiling oil. And anyway, comedy was once going to be the new rock n’ roll, except that never really happened.

Shepherd keeps it fluffy. Rarely does she make ivory-tower pronouncements about how something isn’t serving comedy, or why a certain sort of joke just won’t do. Instead she uses big words and a sort of aloof other-worldliness to create distance between herself and the reader: “It is tempting to say that Tony Law’s show is going to be great when it’s finished but one suspects that life in the Tonezone is perpetually in a rather frantic, reassuringly bonkers state of becoming and that Law knows exactly what he is doing despite appearing to be going with the eccentric flow.”

In this way rather acerbic statements are instantly neutralised and washed over with a sense that Shepherd isn’t entirely sure what she’s looking at anyway. Perhaps she dreamed it. She also likes to put grown-up phrases next to goofy words (‘state of becoming’; ‘bonkers’).

This reaches a metaphysical peak when discussing how Paul Foot’s show culminates “in his prestigious ‘formal comedy from the table’, which tastes just like jokes he has written out in advance”. Indeed, Shepherd is all about taste. In some ways her arms-length reviews give a better flavour of a show than many of her contemporaries who get so close to the thing we can’t tell what we’re, erm, eating.

No doubt this is a result of writing about music, which – above even writing about comedy or food – must rank as the most pointless and self-defeating task in the world.

Shepherd refuses to give anything approaching a police-witness account of what she’s seen. Just as a music journo like Everett True would describe the sound of a band as like a waterfall of pineapple jelly, or like a phone ringing too late at night to be social, so Shepherd skips over the nitty gritty and points at a series of moving pictures. So she cuts and pastes a series of ‘bonkers’ Tony Law things in a single paragraph  so that they sound rather more bonkers than even Law intended. And while reading this we are distracted from the quite important question of whether or not Shepherd liked it.

She never really tells us, except by the allocation of stars. Is this a lightness touch or is it just being flaky? Well, it’s certainly engaging, and it reads well.

Fiona ShepherdWriting for THE SCOTSMAN (Reviewed in 2014) 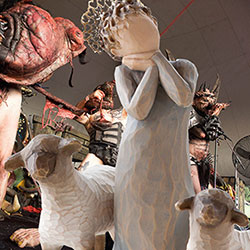