At first, Craig Thomson’s prose style can jar a bit. But then you start reading his work in a clipped, treacly, 1950s cricket-commentator voice and then it all feels right. Especially when he says things like: “There shouldn’t be a problem with drunken rowdiness before elevenses, I’d hope.”

Not that Thomson is impenetrable: far from it. He writes some of the best and most concise first paragraphs on the Fringe.

“Fan Club,” (he tells us) “… is the third successive Edinburgh show from sketch outfit Present and Correct – and the new generation has served up an enjoyable routine which, even if it didn’t move me to join the club myself, is at least a pleasant way to ease yourself into the day.” Then there’s the deft precise cheeriness of “I definitely didn’t want to miss a trip on top of the Blundabus this year, and I’m glad that I got on board with Luca Cupani”. And then, as if to show how much thought he puts into these reviews even before he’s started: “When Lizzie Franks and Nerine Skinner met, what choice did they have but to eventually form a comedy double act?  Fate dealt them a kind hand in the name department, albeit one which I imagine is frustrating for search engine optimisation”.

He does fall into the sketch reviewer’s trap of trying to explain the inexplicable premise, which just leaves us shrugging: “Time travel and the flower shop both had good gags and good delivery, for example, and the French exam was a clever scenario that was well executed”… but for the most part he’s so considered and patient, even in his negative prognoses, that he’s like a kindly old doctor. Of Gurpal Gill he writes:

“I thought Gill was too quick to turn to audience interaction throughout his set – it came to resemble a nervous tic, and became increasingly stilted as the front row grew tired of being picked on.  I’d much rather he took the time to develop his own voice, which is worth hearing when we get it.”

Only once does he get tetchy. “On a couple of occasions, [Fan Club] had me screaming (internally!) “yes, that’s the joke!” It’s quite nice how he brackets and exclamation-marks the word ‘internally’, to make it more internal and screamy.

And Thomson, unlike some reviewers we could mention, felt no need to mention that he was on top of a bus all the way through his Luca Cupani review. A bus! Isn’t that weird? Sadly the downside to this considered approach is that he’s still talking way past the point being made, sort of like a distracted relative who won’t get off the phone. There are two whole paragraphs at the end of his Franks and Skinner report where you want to scream (internally!) “Thanks Craig! Got to go! Our last bill was enormous! Goodbye! “ 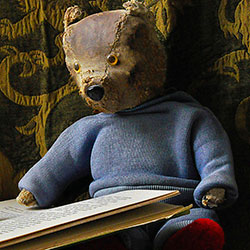