this is an article from 2014We are here. This is happening. Nothing will ever be the same again…

This article was first posted on Sunday, July 27th, 2014 Filed by Mister Kipper

Fringepig’s editor, Mr Kipper, announced our arrival with a letter to Chortle two days ago. This is it. 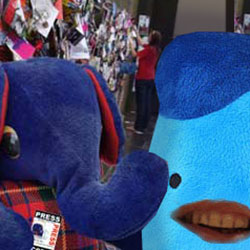 First of all, there is no plug for an Edinburgh Fringe show tacked onto the end of this article. It is not a fatuous blether with an advert on the end. I’m not even going to Edinburgh.

I know what time of year it is. I know that, by now, all Fringe-bound comedians will be feeling anxious and agitated. Perhaps the paradox of appearing confident and happy is grating against the reality of feeling frightened, clammy-palmed and stressed. Perhaps you already feel lonely.

But think of all the reviewers heading that way. They feel just the same as you. Some of them have invested literally tens of pounds, and minutes of time blagging a sofa for a couple of days. Some have bought brand new notepads and pens from WH Smith. Some have forfeit a month of their too-short university holiday, or the chance to sit in a field surrounded by strangers and bottles of warm supermarket cider, for the dream of being discovered as a reviewer.

Every August, hundreds of young people gamble the best part of their summer on the hope that someone out there will read their reviews and offer them the chance to write some more reviews, or maybe give them an unpaid internship or something. And for all but a few, that dream is broken on the wheel of Fringe. Many don’t even get noticed. Some reviews don’t even get read.

So here’s what I’m selling: fringepig.co.uk.

It’s a new website, in which all the Edinburgh Fringe comedy reviewers are reviewed. By stuffed toys.

I know what you’re thinking: Not another one. Not another fly-by night Fringe rag in which stuffed toys review all the comedy reviewers. I know you have reservations. I’ve heard them all. Here are some of the statements I’ve had to deal with:

Ah, no. None of our staff have ever been comedy reviewers. They have only ever been stuffed toys. And I know reviewers can’t get their heads around this, but not EVERYONE wants to be a reviewer. It’s not THAT glamorous.

‘Why does the Fringe NEED comedy reviewer-reviewers?’

Well I’ll remind you that there were almost 200 comedy critics at the Fringe last year, most of them penning about three reviews a day. The Fringe-going public simply doesn’t have the time to read 600 comedy reviews each and every day of their visit. The growth of comedy reviewing means there is a genuine need for stuffed toys, with experience of reviewing, to sift and assess these reviewers; to tell the public which reviewers are worth their valuable time and which ones to miss.

‘Most reviewer-reviewers have no life experience and don’t even know what they’re looking at.

True, but at Fringepig we try to make the most of that. None of our reviewer-reviewers have anything AT ALL in their heads apart from sawdust and foam, so they have no preconceptions with which to judge from.

The stars we give out are what SELL the comedy reviewers, and their websites or magazines, to the public. Simple as that. The Fringe is a beauty contest, and the competition for clumsily-penned three-paragraph comedy appraisals is just SO fierce now. We didn’t make it that way and we can’t change it.

All we can do – all ANY reviewer-reviewer can do – is give a boost to the ones who have genuine talent by saying to the public: ‘Hey! This person over here can sit in the dark and then write 200 words and hand it in! Read THIS person’s reviews because we gave them four stars for saying something more or less cogent about Paul Foot.’

“Aren’t you just peddling your crappy website to get free tickets to see the comedy reviewers?’

Yes. There is an element of that. We will be writing to ALL the main editors of Fringe publications asking for their reviewers’ schedules. Hopefully we can then turn up in the seat just behind the reviewers and review them at work.

This is the biggest comedy-reviewing festival in the world, so comedy reviewers should understand the pressure and be prepared for it. We are very discrete, and most comedy reviewers have the option of not being told that we will be reviewing them. One of us is a life-sized stuffed leopard in a bowler hat who falls off his seat a lot, but apart from that, I would say to all comedy reviewers that by and large you’ll be left alone to just review your show. Remember: we don’t WANT to see you fail.

‘Surely there are some comedy reviewers who don’t want you to review them?’

Of course there isn’t. Why would they be up here, putting their names on things that can be viewed all over the world, sometimes with a little photograph and a mini-biog, if they didn’t want to be graded and assessed? Why are they always tweeting that they’ve just written a comedy review about this or that person if they don’t hope it will reach a wider audience? They wouldn’t get into this line of work if they didn’t crave the attention.

‘Why are there so many female comedy reviewers? Are they any good at it?’

I’m completely fed up of this question. I mean, what year is it, 2009? There are plenty of male comedy reviewers too if you care to look for them, and some of them are excellent and are doing some really out-there comedy reviewing stuff.