This article was first posted on Wednesday, August 6th, 2014 Filed by Mister Kipper 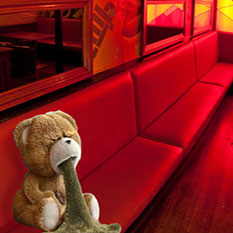 Anyone who has ever tried to put on comedy in a pub function room will be familiar with the intransigence of landlords or, as they so often are these days, ‘bar managers’. They grudgingly allow you to put on an event in their underused grotto, then forget they ever met you. They take down all your posters “that was probably the cleaners”, they double book the space with a band “Oh you meant THIS September?” They deny it to the regulars “Comedy? No idea, mate. Prob’ly shit.” and they do whatever else they can to uproot the fragile orchid you’re trying to cultivate.

The Espionage website has no mention of the Laughing Horse Fringe that each year inhabits it, installing PA systems and building makeshift plywood walls, chasing wires and wallpapering every vertical surface with posters. None of this, according to www.espionage007.co.uk, is happening. What IS happening, and very much so, is the Wednesday night karaoke. Well, it was until the shitting Free Festival interrupted, but there’s no way they’re amending the website. People will want their karaoke back as soon as that shower pisses off.

Whereas most Fringe venues are merely unsuitable for comedy, Espionage has four rooms that are purpose built to repel comedy the way Ronseal repels rainwater. At the very bottom there’s the Mata Hari which isn’t actually a room but a DJ booth and the area in which people who want to have sex with the DJ would normally gather, if Espionage ever employed a DJ worth putting on clean knickers for. Above that there’s Kasbar and Pravda which have been comedy-proofed by putting a  bar that is slightly bigger than the room in the middle of the room.

Nobody has yet explained why these areas are named after a North African brothel, the Soviet state newspaper and a First World War spy (which at least matches the venue name), nor why the place is done out in Colombian drug cartel chic. Presumably there was a unifying concept behind the place once. Perhaps these words sound exotic to you if you do your own tattoos with a compass point and a bottle of Quink, or you have a head made out of meat and steroids. At the top is the lizard lounge, an August-only room hermetically sealed from the street with cardboard and filled with massive seats facing in any direction but the stage.

In fact the entire building is a foreboding four-storey pissoir in which the reek of bodily waste rises like smoke in a chimney stack and is worst of all at Monday early shows. Then the audience – if there is one – is in danger of passing out from the ammonial reek of urea. During the daytime the venue is air-conditioned to the temperature of a cryogenic chamber, which at least slows bacterial growth and preserves the management, whose speech and customs date from the early Cenozoic. Sometimes the bar staff will smile, pleased to have made some human contact. Longer-serving ones will have forgotten how to communicate, be too troubled by the things they’ve seen or be too weak from lack of vitamin D.

If you put on a show at Espionage then your flyering options are either standing at the top of Victoria Street, where people trudging up the steepest incline in town will at least have to stop, inhale and summon enough saliva to tell you to fuck off, or, at the bottom, a disused car park on Cowgate full of crisp packets and used syringes. If you’re flyering a late-night show then large groups of people will go in there to buy a jug of blue paint stripper, be told there’s comedy on, come out again and swear at you for being a cunt.

Your posters will disappear every Saturday night when, after midnight the performance rooms revert to their usual purpose of maintaining Lothian’s world-beating figures for teenage pregnancy and liver cirrhosis; usually pulled down for fun or requisitioned to clean up spillages.

Don’t, on any account, ask the manager where your fliers are. He doesn’t know, he doesn’t care and he would like it if you died.

Previous ArticleArts Award Voice: Is this a reviews site, or is it Nazi child abuse?
Next ArticleA Decade of Glorious Reviews