this is an article from 2014A Decade of Glorious Reviews

This article was first posted on Friday, August 8th, 2014 Filed by Mister Kipper

The best thing about doing the Fringe is that nothing else is happening in the rest of the world at all. Our favourite thespian-comic Fringe rabbit Olivia Self-Awareness remembers ten years of scouring the review pages. 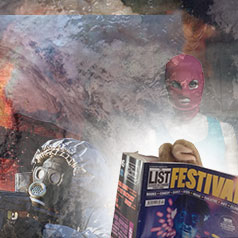 2004: I remember that year so well. Everyone loved me, except for Skinny-Fest magazine as it was then known. I even remember where I was standing as I read the terrible 2-star review they gave me: it was in front of the television at our shared flat in Marchmont. Olivia (not me, another Olivia), Lucy and Lucy-Olivia were watching the news. It was something about Darfur, which is in Africa or something. My flatmates were saying “Fuck, no!” and “Why isn’t anyone doing something?” Lucy-Olivia was even crying. I realised I had to put a brave face on it, for them. “It’s only a review,” I said.

2005: Oh what a year! A five-star write-up in One4Review. That year I was staying with a family in Corstorphine. The woman there was really quite ignorant, always on the phone to her relatives in New Orleans, banging on about someone called Katrina who was always on her way but never seemed to arrive. On the day of my brilliant review I came home and she was in tears. “I can’t get through!” she sobbed. “There’s no signal!” So, just when I really needed us to, we could finally talk about me.

2006: I had a brilliant show, with a Katrina and the Waves joke. People said it was a bit late but it was fine because I prefaced it with “Remember what we were all so worried about last year?” I recall that I had two reviews in this year, one from some fledgling rag called Broadway Baby and one from Three Weeks. Both gave me three stars, as if I’m run-of-the-mill or something. Appalling. So a boring year for me, reviews-wise. Just to make it even more boring, that whole Darfur thing from two years ago had started up again, and was “even worse this time” apparently. I thought I’d be daring and put a Darfur joke in. It went “I asked for ganja weed, not Janjaweed!” Three stars my arse.

2007: I was on fire that year; I kept cracking up my flatmates, Olivia (not the same Olivia), Lucy (not the same Lucy) and Olivia-Lucy-Olivia with my topical humour. One of them said “Ninety percent of Zimbabwe is facing starvation!” and I said “Bit like us in this flat then!” Because we had run out of instant mash. They don’t always get my humour though, and just said “No, really, millions are fleeing across the border. Thousands have died.” I said to Lucy “A bit like you last night then!” (Lucy had not shone at Mervyn Stutter’s Pick of the Fringe). Also she was in a foul mood because her parents had just lost their house as interest rates got close to 8 per cent. “Plenty of room on our sofa!” I quipped. I got a four-star review from Three Weeks, and little wonder.

2008: A rubbish year in which far too many people were distracted by some people running and cycling and wrestling in China. It was almost impossible to find the reviews in the papers. Very low turnouts for one of my best ever shows at Laughing Horse Buchanan Bus Station Staff Canteen (Venue 2087). However I rolled with it and made a joke about how black people can’t swim. It’s fine because my cousin is black. Everyone in my flat-share was in a shit mood, when I asked why Olivia (not the same one as the other Olivia or the other Olivia) said it was because Russia had invaded Alabama or something, and I could hardly hear myself practice my hilarious monologues for the sound of tanks and screaming on the news. “Will you shut up?” one of them said. “I’m trying to watch this.” “I got four stars today,” I replied, righteously. “From the kingmakers at The New Current.”

2009: Who could forget 2009? My flatmate Lucy (not the same person as either Lucy or Lucy), who is not very funny to be honest, got a two-star review from Steve Bennett in Chortle. “It’s not the end of the world,” I said. “Yes it is,” she replied. “Iran has nearly finished building a nuclear weapon. The whole world is on high alert.” So that’s the last time I tried to cheer her up. A week later I got a two-star review from Chortle’s Julia Chamberlain. “It’s not the end of the world” said Lucy, spitefully. I shot back “No it isn’t, actually, because the Israelis have blown up the weapons factory!” The Israelis were the goodies back then. I think. At least I don’t think we minded them as much.

2010: A ridiculous year in which all the banks had collapsed or something and Greece was reduced to eating potato peelings. Everyone was doing credit crunch jokes. I entirely blame the economic uncertainty on the lack of people at my venue – ticketed this time! – Just Down The Stairs Crawling Over Some Plague Pits Using a Torch Up Some Stairs Ignore the Bats And There Should Be an Attic on the Left. At the Caves. Lucy (not THAT Lucy, Lucy or Lucy) said that Russell Kane didn’t seem to be struggling with the economy. I hate Lucy. This Lucy. Not the other Lucies. Although I don’t like them very much either. I got four blobs in The List! The review talked about some other show they walked into instead of mine, but four blobs is four blobs. Olivia (not that Olivia or the other Olivia and CERTAINLY not THAT Olivia) said: “It takes about six years to get something good to put on a poster” and I think she’s right.

2011: A really annoying year in which I had to change all my jokes to make them about the riots. Everyone was doing it. Nobody had my originality though. Every day I would set fire to my T-shirt and walk onto the stage of The Darrell Martin Rubble Garden saying “Hi, I’ve just come from Croydon!” It slayed them. I had to cancel the show on August 5th because of the burns, but not before I got four stars in no less a publication than Hairline.

2012: Bloody hell, more of that ‘Olympics’ nonsense and they were doing it in London this time! No wonder I had to contend with such tiny audiences at The Laughing Horse Shafting House. I had a reviewer from FringeReview in, but Scotland were competing in the heptathlon on the big screen next door. So my BEST JOKE was ruined by a load of inane patriotic yelling. Has nobody told them that this is NOT their city in August? England rents it, and at £75 million a month we shouldn’t have you lot hanging round like a bad smell. Everyone was going on about Pussy Riot. One of those women had had two children, so I did a joke that went “Pussy Riot? Surely that pussy’s seen enough violence!” I only got one one-star review from Fest, but a website said I was the British Doug Stanhope.

2013: Apparently the thing that’s been going on in Syria is now, like, really very bad. But I rolled with it. “Cheer up, it’s not Syria!” I said to everyone who came to my show at Bob’s Butcher’s Shop. They fell about laughing. No wonder I got four stars from The Skinny.

2014: This is going to be a great year. I’ve got a great flat off Hunter Square with Olivia (yes, Olivia! – we’re friends again) and Lucy (not that Lucy or the other Lucy but the other Lucy who isn’t Lucy – we’re friends again!) and her friend, Lucy-Olivia-Lucy. I call her LOL, which makes the others fall about laughing! After ten years of this I’ve learned my lesson. ALWAYS keep abreast of the news. It keeps the show fresh. So which is funnier, Gaza or Ebola?

As told to Mister Kipper

Previous ArticleVenue focus: Espionage (185)
Next ArticleAfter The Hiatus, The Swarming