this is an article from 2014Arts Award Voice: Is this a reviews site, or is it Nazi child abuse?

This article was first posted on Sunday, August 3rd, 2014 Filed by Mister Kipper

We are all familiar with Godwin’s Law by now – the process by which any online discussion will, if allowed to rumble on long enough, end with someone invoking Hitler or the Nazis.

I suppose it depends what sort of paradise we are trying to deny our enemies. For us childless liberals, we want our rivals to know they are SO far from the oracle of groovy lib consensus. But once you have kids, it seems, everyone has a new holy grail: to be the Überparent. And the worst I can say to you then is that, in fact, you are an Unterparent. The very worst kind of Unterparent. You are Baby P’s dad.

And so to Arts Award Voice. This website, found here, is an Arts Council England / National Lottery funded accreditation process whereby young culture vultures can ‘get accreditation’ for ‘partaking’ in the arts.  Fifty years ago, allotting a pile of money to young people and the arts would mean buying every kid a big packet of poster paint, an easel and a stylophone. But (as of four weeks ago) we all know where that’ll lead.

Arts Award Voice doesn’t want to be that hands-on anyway. I’m not even sure it wants kids to CREATE anything. It just wants them to ‘appreciate’ and ‘get involved’ in the arts, the same way that kids these days don’t write essays anymore but do write essays saying how they would write an essay if they really had to. And what’s the best way to get involved in the arts without having to find any artistry in your own soul? What’s the best way to create some non-art about art? That’s right, by reviewing it.

Arts Award Voice magazine encourages its little sneaks to put down the Clearasil and pick up a pen and pad. And it prints whatever they choose to review on its bright, splashy website without any editing, advice, or even sage counsel about how to behave online. Upon the crowded battlefield of internet-quality opinion, Arts Award Voice is sending child soldiers over the top, to be instantly cut down, flailing and bloody, in a hail of sniggering and ridicule.

It’s all too easy to laugh at young teenagers, especially when they write things like this about Marcel Lucont Is:

“Now, I will admit, I am not a regular in the watcher of stand up comedy, but I really could not grasp what a majority of the audience were in hysterics over at any point of French comedian Marcel Lucont’s performance…

“Apparently Lucont has a book out, from which he reads us two extracts in the durentation of the show. Theses were mundane. If I wanted to read his book, I would buy it myself, and I can’t say this performance worked as a marketing strategy to incline me to.”

This masterwork, carried out by one Mollie T, is not something – like most terrible reviews – that can even inspire anger. Mr Dubus, the man behind the merlot, cannot complain that reviews these days are written by ignorant children now that they ARE ACTUALLY WRITTEN by ignorant children. We can only giggle and laugh, and then feel bad at ourselves for laughing, like we’ve stamped on a macaroni glue picture. And then feel anger – proper, righteous anger – at the shitty adults who manipulate children into doing this sort of thing.

Yes, you should teach children to write book reports saying they didn’t like the book. Or film reports saying they didn’t like the film, with reasons and working-out. But these always used to be handed to a teacher, who would correct the spelling and write things like ‘Really?’ in red biro in the margins. And then the children were allowed to gradually, quietly change their minds without their opinions at age 14 having been writ large upon the world, and Shakespeare was never told that he was rilly rilly borin. 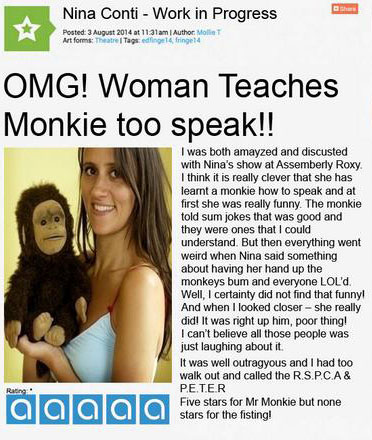 With this website, children are pushed into conflict – and conflict, as anyone who has posted on Chortle forums or the standup Facebook pages knows, it truly is – with adults. Grown-ups are telling children “Go over to that man on stage and, using your whiny unbroken snot-falsetto of a voice, tell him that he’s rubbish.”

What’s truly tragic is that, within the body of her review, we can see that Mollie T is feeling the first hot rush of feminism, and that is good. But she has not yet grown a sense of perspective, parody or satire. Fully-fledged meta-perspective, irony and postmodernism may NEVER develop in this young soul if her early thoughts are cruelly exposed to the world like this.

As I type this, I learn that Lucont’s review has been taken down, possibly for proofreading. But you can still read someone called Emrys thinking that Loretta Maine is actually too drunk to perform, and a chap called Bhavesh prefacing his review of Andrew O’Neill by saying he doesn’t really know anything about heavy metal, but he knows a man who does.

To repeat, only child abuse is LIKE child abuse and only the Nazis were just like Hitler. And I am the first to admit that reviewing, like prostitution or toilet cleaning or selling me my elephant painkillers behind the Esso station, is a job that someone has to do. But that someone is NOT a child.

I’m not one for making kids wear a crash helmet to go on the swings, or deal with their petulance with 20 seconds on the ‘thinking step’. School of hard knocks and thick ears all round, I say. But this thing – this is the sort of brutal cynicism we thought we’d seen the last of. These are just CHILDREN. I would say that compelling children to partake in something this ugly, via state funding and with the money taken off poor people who buy scratchcards; telling them that they will earn credit, affirmation and respect by doing it – well, it’s just like the sort of child abuse the Nazis used to do.

I WOULD say that, if I didn’t know better.

*The picture above is a quickfire parody of Arts Award Voice tweeted by Rob Tofield, reproduced with thanks

* The image below is a screen-capture of the actual article

* Just to be clear, Arts Award Voice is not Nazi or child-abusive 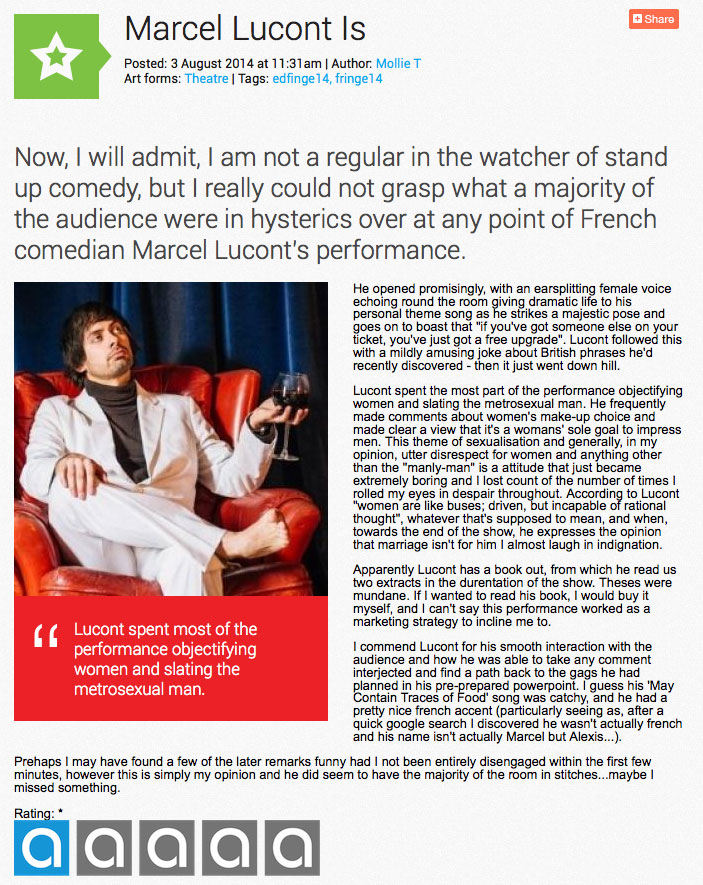 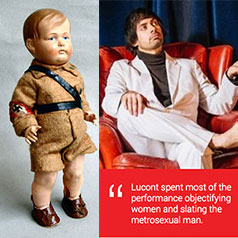