this is an article from 2018Land of guilt and funny 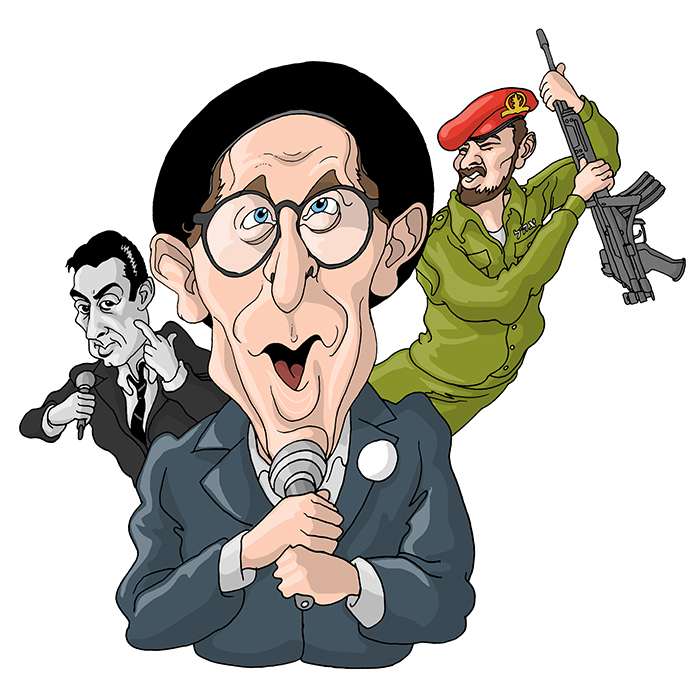 The audience’s response to my 20-minute set was kind rather than enthusiastic, but we were all enjoying ourselves, all Jews together, the stage draped with the visual glue that held us together: the flag of the State of Israel.

More than 20 years later I stood near the same flag, flying over a checkpoint on the occupied West Bank. I was heading to Ramallah, to do my Jewish comedy to about 100 Palestinians. This audience, understandably, was even more curious. They couldn’t believe that anyone, let alone a Jew, had come from abroad to entertain them in their landlocked prison. I felt like Johnny Cash without the cash.

Between those two gigs I’d learned a fair bit about freedom of speech and the Jewish predicament.

When Jews weigh into the freedom of speech debate, as we invariably do, we do so on the libertarian side. Like our greatest comedian, Lenny Bruce, we tend to think anything goes.
So nothing is more unhelpful to the cause of Jewish humour than the growing belief that criticism of Israel equals antisemitism. Along with this there’s an unwritten edict now that only Jews are permitted to tell Jewish jokes, as if we Jews need special treatment.

I’m not very popular among the UK’s Jewish leaders and I’m kept well away from most Jewish comedy crowds. I have been told by professional bookers that I am not wanted because of my political outlook. Countless times, Jewish people who enjoy my comedy begin to book me and then suddenly disappear. At other times my gigs get cancelled.
I can’t claim to be a victim of exclusion, because I have happily done my share of excluding others.

A few years ago I let it be known that any comedians doing benefit shows for an organisation called the Jewish National Fund (JNF), would not be welcome at my comedy night in north London. The JNF raises money to buy homes in the Holy Land for Jews only. I regard it as integral to Israel’s ethnic cleansing.

Many of my fellow Jewish comedians, who have no difficulty pocketing the JNF coin, have taken umbrage and we’ve fallen out. It’s a pity because I like them, they are funny and they’re not racists. But we see things differently, at least we do now: The JNF is the group I performed for on that flag-draped stage more than 20 years ago. I’ve changed. Jewish comedy needs to change too.

I enjoyed David Baddiel’s joke: “Jeremy Corbyn states there is no room for anti-Semites in the Labour Party. That’s because it’s already full up with them”. I am a supporter of Corbyn and I think the basis of this joke is false, but I still laughed. Jokes don’t need to be true to be funny.

Sadly, most Jewish comedians now seem afraid to challenge their audience’s conservative consensus for fear of being labelled traitors, and many Jews seem afraid to hear, let alone laugh at, anything challenging or new.

I like to think that Lenny Bruce was the first person to present stand-up comedy as social critique, and that he lived and died exposing hypocrisy in the US establishment. We Jews owe debts of gratitude to Mr Bruce. But who do we have in stand-up today that compares?

Now that antisemitism is rising across Europe again, a new impetus to Jewish comedy has never been more urgent.