this is an article from 2016City of Dreams (possibly Kafka’s) 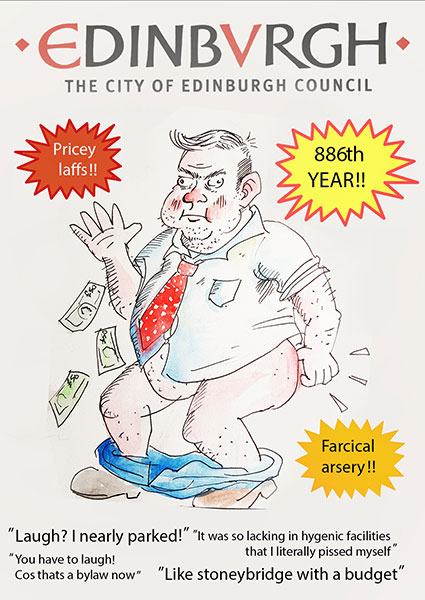 I live in the greatest place on earth, says Derwent Cyzinski. But the way it’s run is often like an absurd black comedy

The trammage done
Have you checked out the live Chilcot report read-through at Bob’s Blundabus? There’s another report that begs to be read in its entirety by comedians in a shed. That is, when we get to see it. The Hardie report into the Edinburgh tram fiasco, which Alex Salmond promised would be “swift and thorough” has now cost the Scottish Government £3.7 million and climbing, according to Transport Scotland, and has yet to make any of its findings public.

The enquiry employs 25 staff who are sifting through more than 6 million documents. Edinburgh’s tram system, intended as a three-line network that would cost £375 million, ended up as a single line to the airport that cost £776m, reaching a billion after interest payments. Previous Convenor of Transport Gordon MacKenzie summed up the failure as “We didn’t have the right skill mix”, meaning that none of them knew anything about trams. Which is probably all we need to know, plus he already said it for free.

The upper-fixers
Ever wondered why Fringe rents are so high? This might help explain it. In June last year Edinburgh Council’s Charles Owenson and James Costello were sent down, along with others, for their part in one of the most scandalous exploitations of modern history. Under the council’s Statutory Notice System, tenement householders who couldn’t sort out their own repairs got the repairs done compulsorily by the Council, at a massive markup. The council hired the contractors.

Obviously this was a cushy number for any builder and so Owenson and Costello were giving out contracts in return for cash, football tickets and trips to lapdancing clubs. They were even billing the City for the expenses incurred in GOING to the lapdancing clubs. The judge said that the pair were “stealing from and manipulating the public purse almost at will”.

One of the contractors, Action Building Contracts, was making £400 million a year at its zenith, vastly overcharging Edinburgh citizens for repairs. In one case a repair estimated at £15,000 was charged at £500,000. As a result of the scandal Edinburgh Council is now owed £22 million from local tenants, much of which is to be written off as irrecoverable. But there’s more fun to come! Having been in abeyance for a bit while the Council cleans up the mess, our compulsory repair scheme will be back by this time next year.

Slow tar
“Winter weather” is the deathless culprit for explaining why Edinburgh’s roads are so appallingly bad, now ranked in an AA survey as the worst in Britain for potholes and unattended repairs. The A8 to Corstorphine is reckoned the very worst in the UK and is beaten for congestion only by roads in inner London. Why the roads in Oslo, Reykjavik or Stockholm stay so smooth and tarmaccy has yet to be satisfactorily answered by the “winter weather” stop-gap, but it may just be that the City of Edinburgh Council prefers to spend its people’s money on visionary schemes rather than unglamorous maintenance.

Council Transport Convener Lesley Hinds recently announced that a whopping £120,000 would be spent on the black stuff in the coming months to fix George Square and the Mound in a ‘right first time’ overhaul. (Shouldn’t ‘right first time’ go without saying really? Isn’t this a bit like announcing you’re taking your beloved on a not-rapey date or running a razorblade-free soft play?) But compare this figure to the £2.2 million spent on the just-imposed 20mph speed limit on the entire city centre, enacted despite evidence from Portsmouth City Council that the same scheme (delivered at a quarter of the cost) had actually made road casualties increase slightly.

The 20 mph speed limit is enforced at all hours. The last time a vehicle travelled at 21 mph over our cratered boulevards during daylight was sometime between the invention of the diesel engine and the installation of traffic lights in 1928. 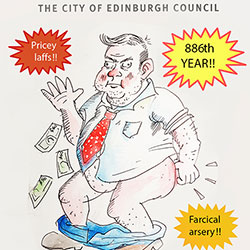