This article was first posted on Thursday, August 18th, 2016 Filed by Mister Kipper

People – especially creative people – tend to reach the same conclusions at the same times. Fitzroy and Wallace landed upon evolutionary theory about the same time as Darwin. A whole raft of geophysicists, having spent the previous decade laughing at the theories of Alfred Wegener, suddenly decided that his Continental Drift theory was correct. The truth has a way of presenting itself to individuals within a creative ouevre simultaneously.

Which is why, perhaps, so many comedians end up telling the same joke in slightly different ways. And why so many performers at this year’s Fringe decided that having paint all over your face was the best way to sell a show. “This year I’ll REALLY stand out,” they all thought to themselves at the same time. “I’ll be the only one to have fuckin’ PAINT all over my face!” Well we sympathise… it’s hard to be different when there’s a billion shows on at the same time. But needless to say these shows all have esoteric titles that are nothing to do with paint or having it dumped/squirted/plastered on one’s face.

We wish that just ONE of these shows was actually CALLED Fuckin Ell I’ve Got Paint On Me Fuckin Face For Some Reason. Why, though? That’s what we’d ask ourselves. At least Matt Richardson is ENJOYING his paint splattering. Everyone else is thinking “Yes, I have paint on my face. What of it?” I dunno. You tell me. 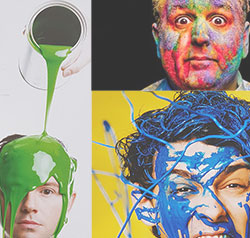