Two things are possible with regards to Arjun Sajip: Either he is a miserable git of the first vintage, or he is so weak willed and/or low status that he is sent to review the Very Worst Things In The World Ever. Either way, Arjun should take control of his life and stop expelling his disappointments into the faces of small-venue Fringe talent.

Arjun patrols the free and far-flung venues, watching some shows which, I’ll wager, even the performer’s family don’t know are happening. And he gives them all one star or, if they’re very good, two.

So:  “nothing manages to scale the peaks of comedic brilliance” he says of one show. “I really hate to say this, but this show is a total waste of everyone’s time” (he’s lying about hating to say it). And so it goes on, in a steady slog of airy dismissal. But one performer who is “funny” and “affable”, “like a strange mixture of Meera Syal and Dobby from Peep Show” still only merits two stars. So does a play in which “sympathetically drawn” characters “put in a spirited performance”.

Arjun has a fetish for David Brent. “At least David Brent is vaguely sympathetic” he says, for absolutely no apparent reason, in the middle of reviewing Bob Slayer. “With his bored-looking assistant controlling the PowerPoint cues, [the performer] resembled David Brent in that motivational speaker episode of The Office,” he says of something else.

Even when he digs deep for a third or fourth star, Arjun damns it with the faintest praise imaginable: Of Bolivia and Beyond he says: “The stories told aren’t fantastical enough for doubt to be cast on their veracity”. Translation: It’s so dull it must be true. Most of his reviews end by saying how good the show could have been, if only it had been better. Or different. Or a different show that was better.

For the most part, Sajip wants to come and see your show and say how you remind him of something he saw on television, probably David Brent in The Office. And it will carry on like this until everyone else in the Three Weeks office stops saying “Ugh, I don’t want to go to this. Give it to Arjun, and tell him to type it up in the toilet. Excuse me, Arjun, could you come out of there a second? I had a dodgy burger outside the Gilded Balloon and need to have massive diarrhoea. Oh my sainted aunt. Oh bloody hell. Oh oh oh …. agggghhhh! … Agh… Ahhh, that’s better. Back in you go, Arjun. No, you can’t open the window. It’s Edinburgh in August, it’s bloody freezing. And I want that review of the Abercrombie Polytechnic Tealights show at Leith Church Hall by 3 O’Clock SHARP!”

I imagine, in mitigation of Sajip’s foul mood, that it goes something like that. 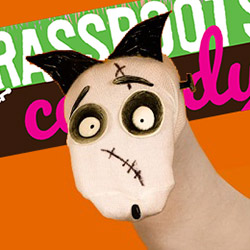