It is a characteristic of Fest that a show such as George Ryegold can be described as ‘explosive’ – as “deep, deep parody, tearing apart the faux-charity and propriety of the West, along with himself in the process, to challenge and change us” – and then be given three stars.

If Ryegold can effect such a response in a reviewer, is that reviewer not beholden to champion that work? Are not reviewers – if there’s any point to them – supposed to alert us to anything fresh, strange and blood-bumpingly new, as Latimer seems to concede this show is? It feels as if Latimer’s critiques are trying to be more generous than Fest’s parsimonious editor – or whoever it is with the keys to the star cupboard – wants him to be.

The result is that you wonder, frankly, what use Latimer is. When you view his reviews on one page, it’s the people you’ve heard of who are graced with fours stars. Everyone else has two. You can’t help but feel that, as with so many reviewers, he doesn’t have the moral fibre to guide us or set trends, or even admit to liking something a bit weird and different. Like so many reviewers Latimer would rather cosy up to popular kids and say Yeah, I like them too.

It won’t wash. Latimer is a good writer, who takes pains to properly describe each show before assessing it.  His paragraphs are tight and well-structured. If he could shake off the cynicism and infuse his reviews with a bit of joy and – dare I say – COURAGE, he might even contribute something.

Andrew LatimerWriting for FEST (Reviewed in 2014) 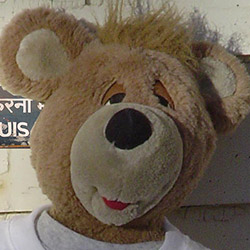