“I went into the theatre thinking that assisted suicide was a sad but sometimes necessary thing, and I left thinking just that, having learnt very little”. Thus Tom Moyser admonishes Chris Larner, explaining that he had to remove a star from the true monodrama of his terminally ill wife, because he didn’t learn that lethal injections were in fact funny, or sexy, or raspberry flavoured. I mean, come on: give me something I haven’t already seen in my 18 long years as an overprivileged tadpole.

Moyser is a scarf-wearing Oxford university student who looks and sounds like a scarf-wearing  Oxford university student, so by his own system we’ll need to take a star away from him for failing to take us by surprise. He claims to be a film producer, a radio presenter, an English teacher AND an arts reviewer, so little wonder that he can’t find time to chop his textual excrescence into smaller portions – some of his reviews are 400 words and one paragraph. Some of his sentences are like James Joyce, if James Joyce had been not very good.

He even manages to spoil Bridget Christie’s otherwise quite perceptive review, opining:  “It’s a shame that the title motif, concerning Bic’s women-only Biro alternative, is the show’s safest and least original material, already largely precluded by the product’s infamous Amazon reviews.” Oh the INFAMOUS Amazon reviews? Which you only know about because Christie told you this product existed and so you Googled it? Don’t put your hansom cab before your horse, Fauntleroy.

His next line:  “If this was the source of her material, it is uncredited in the show” shows us just what Moyser is: a snarky little tell-tale milk monitor. In a scarf. 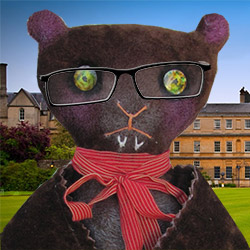