My esteemed editor Mister Kipper made the point, in his editorial to this site, that sometimes the holy land of comedy is just a sort of Amsterdam to reviewers. They arrive, they empty their angry balls and then they jet off back to their theatre and their cabaret and their wives and their children’s shows and their spoken bloody word (what IS spoken word? It’s comedy without the jokes, right? Who the fuck CAN’T do ‘spoken word’?)

And so to Rebecca Lunn, who visited one comedy show in 2013 and condemns this innocent, wretched panda to write up her efforts. Lunn chose to see Domestic Science, with Helen Arney and Rob Wells. Panda has not seen this show, but it strikes her that Lunn is rather ungenerous, awarding just two stars largely because she didn’t have a clear view of some science experiments that were part of the performance. I mean, some reviewers would go “Wow, science experiments?! In a Fringe show?! Brilliant!” But no, moaning that you can’t see where the performers attached the Hoffman clip or positioned the Buchner flask is another way to go, if you like.

To pile chutzpah upon malevolence, Lunn later goes to see a science-themed show in the cabaret section (Oliver Meech) and, not liking this much either, has the gall to suggest that it should try as hard as Domestic Science did to inform and entertain. Yes, your one-star show could get two stars if it pulled its finger out! “Even in 2011, a Three Weeks review said Meech was using tricks we’ve all seen before, so you’re unlikely to see anything new now,” says Lunn, with as much logic as she has empathy. Ooh look at me, I can compare and contrast two things I’ve seen AND do a Google search. Please give me a GCSE in General Studies.

I hope that Lunn will stick to reviewing those other performing arts in future. And I hope she stops using a photo of herself wearing graduation robes and mortar board. It makes it look like she’s been murdered. 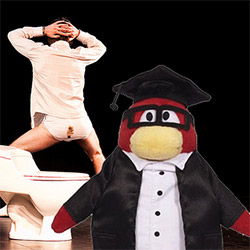