Action Figure Archive is look at my favourite toys of the 80s. Things like He-Man, Star Wars, Transformers and My Little Ponies. It’s a fun short show… Last year I performed a heavy monologue about Richard Nixon so it was important to do something light this year.

My first Stand-up gig was at Jester Jesters in Farringdon (they’re still going, lovely blokes). It had a proper comedy brick wall and it was so cold you could see your breath in the air. I got one laugh… In the 1990s and early 2000s I was a performance poet on cabaret shows, so I was used to getting no laughs.

My friends think I use the toilet out of nerves but it’s because my diet is very poor.

The Daily Mirror said that a show I was part of was ‘Pick of the Fringe’…. I still trade on that now. Last year I got a two star review for The Scotsman for a monologue I was performing. I was really angry as I advertised it as a work in progress, plus I stated on my press release that I wasn’t interested in reviews, I was only interested in being included in features. The piece itself was the epitome of lazy reviewing – A summary of the press release and then one line actually about the show.

Maybe… I don’t know. Most reviews I read last year from the comedy ‘press’ came across as poor attempts at hatchet pieces where the critic was trying to be the main thing about the review. As someone who has worked in journalism and has been published in nationwide magazines, I feel that the mark of a good critic is being able to see value and talent in things that they don’t personally enjoy. I’ve not seen much evidence of skill in our industry press. It’s not helped that some websites have an obligation to the courtesy review. How many great shows are going unnoticed because a lesser show has more money to advertise on a website. At best it’s ethically dubious at worst it’s payola.

No one should know who Bruce or Steve or Copstick is, let alone be friends with them. Our press should be anonymous otherwise It creates circle jerks and encourages nepotism. There’s a class problem in comedy (and performance arts in general) and the press clique is part of the issue. The press should never be the story. Websites that review comedy should not be running new comedian competitions. The whole circus seems like a conflict of interest… but then it’s as I said above, it’s a massive circle jerk.

It’s a tricky one, as I was more concerned about the court saying they didn’t recognise context. That was more alarming than some low-life hiding his views behind so called ‘humour’.
I think he committed a hate speech offence and should be held accountable, but in a court that is fit for purpose. His defence of ‘it was a joke’ is pretty thin as he hasn’t previously demonstrated any understanding of humour… but that’s the problem with a subjective artform. All in it’s good that he posted the video because it allowed me to unfriend and block several people who shared it on social media.

Anything can be funny if it’s tackled correctly. However this shouldn’t be seen as flag waving for newer acts to be ‘edgy’. Comedy is like jazz music, learn how to do it before you learn how to undo it.

I don’t think so. I used to do a set about the pound shop but I stopped doing it when I realised people were laughing at the poverty aspect rather than the material. I’ve gone too far in that respect, I’ve played to a crowd and gotten what I deem to be ‘bad laughs’….

I think it was one from my 2016 Edinburgh run, my show was called ‘Are You Really Being Served?’ It was the second Saturday and everything just clicked. Everything landed, all of my riffing, all the heckles… everything just worked. I got two bookings to do the show at small ‘pub’ comedy festivals on that day alone.

Find Steve McLean on the web - 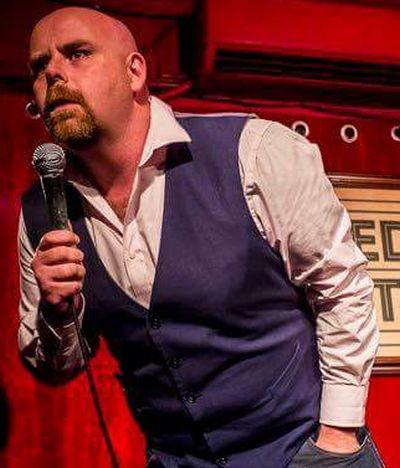 Find Steve McLean on the web -

As someone who has worked in journalism and has been published in nationwide magazines, I feel that the mark of a good critic is being able to see value and talent in things that they don’t personally enjoy. I’ve not seen much evidence of skill in our industry press.