Tell me about ‘The Cabinet of Madame Fanny Du Thé’.
It’s a musical comedy which celebrates curiosity. The audience are invited by eccentric 18th century adventurer, Madame Fanny, to take their pick from her cabinet of curiosities. For whatever they choose, Fanny and her servants perform the elaborate tale behind it. But meanwhile, somebody’s coming to end Fanny’s fun. The show features songs and stories in a mixture of genres. It’s got all sorts: pirates, brain-transplants, lusty Frenchmen. We have audience interaction (but in a fun way, not a scary way – we promise!) and the order of stories can change per performance depending on what the audience choose from the cabinet, keeping us on our toes.

Tell me about your theatre company, ‘Riddlestick Theatre’.

We formed in 2016 after graduating from the University of Bristol, we’re made up of actor-musicians who just love telling stories. We’re dedicated to entertaining our audiences by tickling their fancies and floating their boats with weird and wonderful tales. Seeing a Riddlestick Theatre show is an all-encompassing, rambunctious experience (find out for yourself, wink wink).

Tell me about your previous show, ‘The Dead of Night in the Middle of Nowhere’
It was a folk musical set in a fictional medieval kingdom, which imagined how well-known idioms like ‘curiosity killed the cat’ and ‘crying over spilt milk’ came to be. These tales were interwoven as part of a surreal narrative which centred around the dastardly King Silverspoon (born with a silver spoon in his mouth – literally) and his search for the eye of ‘The Beast.’ The songs parodied different musical genres, like traditional folk, rap, show-tunes and medieval music. Being all about idioms, it was absolutely brimming with puns, and who doesn’t love a good pun!?

Are there any subjects that are not suitable for the stage?
No, theatre is a forum to explore all aspects of life, just like all art. It all depends on how you approach it and your audience. The shows we’ve made so far have been comedies, and we haven’t included any material that’s too controversial. Although, our first show, The Dead of Night in the Middle of Nowhere, did feature characters’ eye’s being plucked out, but because it was so exaggerated and fake, it was less shocking and more funny. It also featured a poem by a character who had lost all his limbs, because he’d had his arm twisted and his leg pulled, etc. Basically we shoved all the limb-related idioms into one poem. This poem usually went down a storm, but we were sometimes worried it could be offensive. We always just remembered that scene from Monty Python’s Holy Grail when the Black Knight gets all his limbs chopped off but still jumps around shouting ‘Tis but a scratch!’ and that comforted us.

Tell me about your best and worst review.
For The Cabinet of Madame Fanny Du Thé, an audience member said it was the best £6 she’d ever spent and somebody tweeted “Still utterly blown away by brilliance of @riddle_stick’s show at @TheRoomAbove last night. I haven’t laughed that much in a long time!”. The worst review would probably be when a couple of people walked out of The Dead of Night in the Middle of Nowhere, during the previously mentioned poem about the boy who lost all his limbs (probably not fans of Monty Python’s Holy Grail either…)

How do you feel about reviewers generally?
It’s quite daunting how powerful reviewers are, how much influence one person’s opinion can have over whether audiences go to your show. As an audience member I’m definitely guilty of choosing shows based on their star ratings. It’s a lot of responsibility, to be a good reviewer I think it’s important to detach your personal taste and focus on the quality of the show regardless of whether it’s your particular cup of tea.

How does performing at ‘The Room Above’ in Bristol compare to performing in Edinburgh?

The Room Above and Laughing Horse @ The Mockingbird are both small theatre spaces above pubs. That’s great because we like a merry audience, especially with this show which involves some (optional) audience interaction – people can be a bit more up for getting involved after a drink. The spaces are actually really similar, so we should feel at home. But we’ve only ever done a run of three shows in a row in Bristol, so the whole month in Edinburgh is going to be a leap!

Is it true that Bristol has a crocodile?

Yes, but it identifies as Bristolian human now and goes by the name of Siobhan.

Looking back over your time in the theatre, tell me about the best night of your career so far.
It wasn’t technically a night, we did a preview performance of The Cabinet of Madame Fanny Du Thé at Brainchild festival in 2017. We did it in the woods in the afternoon, and we started off with an audience of about twenty, and as the show went on, more and more people who were ambling by stumbled upon us and sat down to watch, and the crowd just grew and grew in front of our eyes, it was amazing!

Find Kate Stokes on the web - 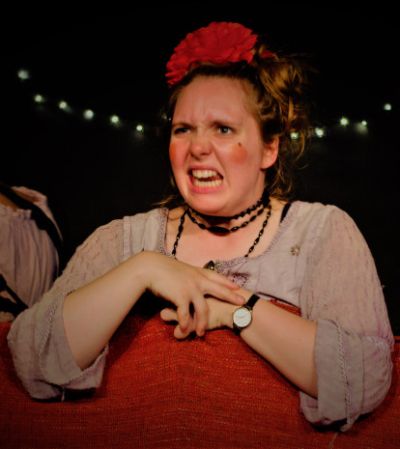 Find Kate Stokes on the web -

For The Cabinet of Madame Fanny Du Thé, an audience member said it was the best £6 she’d ever spent… and somebody tweeted “… I haven’t laughed that much in a long time!”.