The Great Baldini – A Magician’s Journey is a deeply personal autobiographical ramble through the life of one of the greatest magicians of all time. The Great Baldini, relict of the music halls, is a truly Dickensian character (think Vincent Crummles) in the mould of the great actor managers.   Here he invites us to join him in journey through space and time through his life from the early years – discovering his Grandfather’s magic case, his first magic show – to the present where, live on stage, he will attempt to rival Houdini’s greatest escape.

It was a charity gig to raise money for a local children’s hospice. I created the character/persona of the Great Baldini as a performance name to add a little luster to the posters. The show went well (we raised £2,500) and afterwards people started asking me to do their birthday parties and other charity gigs.   I performed at a working men’s club in Bournemouth simply because Tony Hancock had played there as a teenager.

They are beautiful, beautiful people – endowed with preternatural wisdom and taste!

Ahhhh, really?   Without knowing the context, and on an instinctive level I can’t see any comedy in that. Simply it can be taken as an endorsement of Nazi atrocities. I love free speech but there is a line.   Yes, he incited anti-Jewish sentiment – crossed a line into hate speak.

Only once – I forced a very, very uptight, self-regarding young man (the fiancée of a friend’s daughter) to participate in a very physical illusion – he was very upset. I wasn’t invited to the wedding.

Every year I perform in the Battle of the Wizards magical cabaret at the Crown Hotel in Blandford (a charity magical comedy cabaret gig for Southern Air Ambulances). In 2014 selling tickets was a chore (we raised £2,500). In 2018 the tickets sold out in 24 hours and raised £6,000 for Air Ambulances. It has become a Dorset fixture and as a bonus I crushed the other wizard – Duncan the Deadly.

Find Great Baldini on the web - 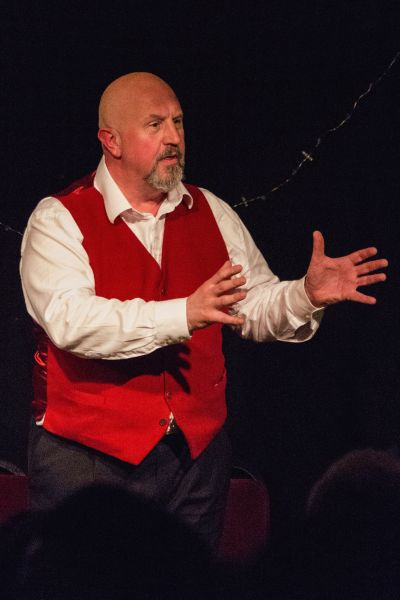 Find Great Baldini on the web -