It’s a life changing, life affirming, accordion pumping, tap dancing, glitter fest for the senses. Bring your boyfriend and sit him in the front row!

My first gig was age three singing Kylie Minogue’s locomotion at my grandparents pub… The act hasn’t changed much since then.

Just before we step out there, I usually look the band straight in the eyes and tell them that they are lucky to be working with me and that everyone is replaceable.

I hope both my best and worst reviews are still to come!

Some of my best friends are reviewers! Ok… Maybe not my BEST friends…

Unfortunately, I don’t think you can pick and choose when you want or don’t want free speech. Having said that, I don’t think this is particularly funny… But does that make it illegal?

I don’t think cabaret has limits but you have to think about the WAY in which you present certain subjects.

Probably… but that’s half the fun and if you’re lucky, I could go too far every single night of this festival.

There have been so many including all my shows at last year’s Edinburgh Fringe, but I have to say a recent highlight was my first audition at America’s Got Talent. I was so, so nervous, but the crowd was amazing and the judges loved it.

Hans was talking to Wrigley Worm.

Find Hans on the web - 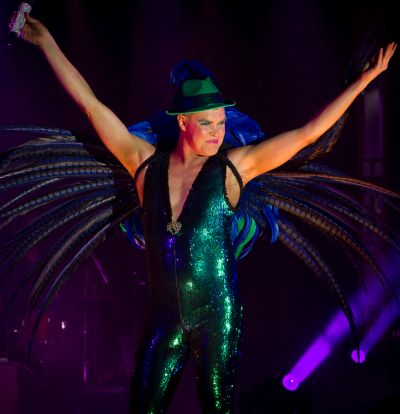 Find Hans on the web -

Some of my best friends are reviewers! Ok… Maybe not my BEST friends…