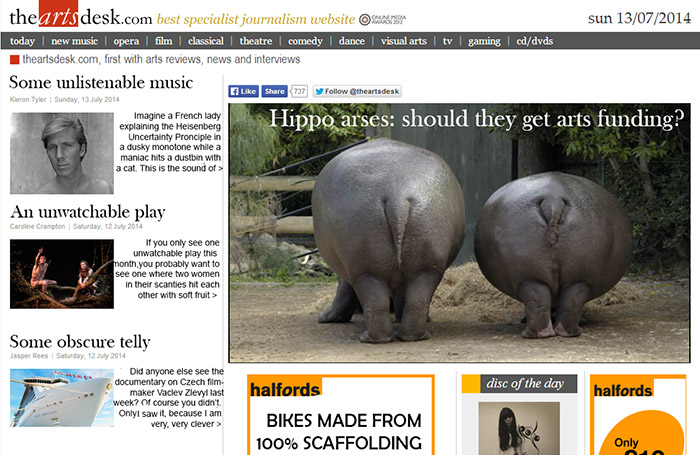 The Arts Desk is a small website with ideas of world domination. It has properly-trained critics. It has departments, and people heading up those departments, like newspapers used to have before they slashed and amalgamated themselves to near-extinction. Arts Desk asks for money at the bottom of its articles so that it can keep publishing, sort of like Wikipedia, because it would be a tragedy if there were one less font of critique in the Western world.

Well, we say that, but actually this publication isn’t half bad. Intelligent comments, near-impeccable use of English, and a newspaper-trained sense of style and use of pictures. If only it could do something about the 16 hectares of white space at the top and left margins, which may be ‘creative’ in print but is just a ballache on screen. Also, whereas you could read The Arts Desk for free last year, nowadays it whites out and asks for money after a few clicks. I mean, it’s less than £3 a month, which I’d say is well worth it, but then this is the internet where we’re used to having Absolutely Everything for free and then adding a comment to say that the Absolutely Everything we had wasn’t very good.

One of its staff, Ismene Brown, wrote in The Guardian lately that the Arts Desk is “Britain’s first professional critics website (all web, zero print), launched in 2009 to kick away from the print ills that were emerging way back”. For print ills, see The Scotsman (All print, zero functioning web, circulation now below 30K). TAD is planning to take over grown-up arts commentary when our newspapers finally die, and for that we must grudgingly applaud it.

However, like the rest of the furniture in the arts world, this desk is not bothered much about comedy. About as bothered as comedy is with the arts, in fact, and we all know that comics only join Equity so that no feckless poncy actor can steal their names. So for 2013 there were only 12 comedy reviews, way less than the previous year. These were mostly delivered in tranches of three and all by the same reviewer. Even so they were mixed up with some theatrical nonsense and, ugh, Gyles Brandreth. Frankly it shows what a dumping ground comedy is to the ‘arts’ crowd if people are prepared to shoot Brandreth over our walls like a bubonic corpse at the Seige of Caffa. No no no, Arts Desk! You take him back and put him in Physical Theatre or something. And for fuck’s sake start taking Fringe comedy more seriously.

Reviewers for The Arts Desk 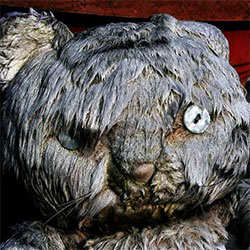 (First reviewed in 2014)The Arts Desk 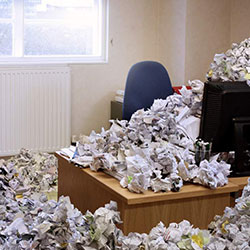