Full marks to Graeme Morrice for being rambling, irrelevant and slightly offensive in the opening paragraph of his Lucy Beaumont review. “It’s a balmy Thursday night and there’s a mixed crowd packed into one of the smaller Pleasance Courtyard venues. Something’s needed to take our minds off the heat and luckily there’s a slightly ditzy Hull girl on hand to do just that.”

However, it would be wrong to say that Morrice is dismissive. He’s not that all. He’s usually just plain confusing. “If you are one of the brave then don’t worry about being ridiculed for something as simple as an ill chosen T-shirt, that would be far too easy for [Adam] Riches; he cares too much about the audience for that and therein lies the danger.” What exactly am I being warned about here? To wear an unmockable T-shirt? Or not to worry about the T-shirt? If I didn’t need to worry about my T-shirt, why have you mentioned it?

It gets worse: “In a ripsnorting opener we’re introduced to one of the UK’s best loved actors in entirely familiar surroundings, if the laughter isn’t surprising then fighting back tears for dying stage furniture is.” WHAT IS GOING ON? Surely the point of a reviewer is that they be our eyes on the ground. But Morrice is not that. Morrice is the huge fucker with the stupid big hair sat right in front of you in unraked seating. What’s worse is that he gave Riches four stars, and I am unfamiliar with his art, so I really do want to know what’s happening here. But I can’t. Morrice’s backside is parked splat in the middle of the action.

There’s similar confusion in his Oliver Meech review, where theres “a very impressive card trick that has everyone oohing and aahing loudly and a snack lover’s dream ending hinting at what could’ve been, if only we had all time travelled [sic] back to the start of the show for another go”. I was fine up until the oohing and aahing.

His review of Chris Turner is much better and gives a nice sense of the atmosphere: “The only breaks in an otherwise high tempo show are the occasional pauses to allow some of the jokes to sink in, listen out for the groans as pennies drop and try your best not to fill in the gaps for others.” Annoyingly this is part of one enormous paragraph that also commits the sin of set-listing: “posh school, worried parents, studying archeology, falling in love, minor deviations involving the periodic table and roman numerals”. If anyone in Edinburgh needs a random list of stuff they can stop a comedian and read the back of his hand.

In spite of all this Morrice has a snappy writing style and, when he makes sense, his prose rattles along quite agreeably. It’s just that, all too often, he doesn’t make much sense at all.

Graeme MorriceWriting for THE SKINNY (Reviewed in 2014) 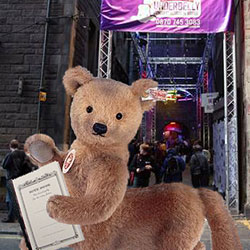