Well, you wait 67 years for an Edinburgh Fringe parody to happen, and then two come along at once.

This one is very wet-nosed and friendly and is called Edimbrugh Fringe Dog. Fringe dog spells everything wrong and gives everyone five stars.

As you know, we at Fringepig get quite cross with reviewers who use grammar incorrectly and fail to check their work for typographical errors. You might expect that we would relax this rule for a small over-excited dog, but I’m afraid not. This dog has clearly taught itself to speak a human language, type to a basic level and upload its work to a blog site. Would it be such a massive step for him to check his bloody work?

Fringepig is staffed entirely by stuffed toys. None of us have blood, or a pulse, or a cerebral cortex, and yet here we are happily looking stuff up in Hart’s Rules and the Oxford Dictionary for Writers and Editors. I can’t help thinking that, if you’re a living, breathing dog who has managed to do so much then running a spellcheck and using capital letters would be, by comparison, a very small developmental increment. This dog’s carelessness is sinking the boat for a ha’porth of tar in my opinion.

However, we value consistency above all, and by giving five stars to every single act Fringe Dog sees – or sometimes he just bumps into them or notices their poster – Fringe Dog is probably the most consistent reviewer of the Fringe this year. Also, unlike other reviewers, you could share a drink with him without feeling artistically compromised or dirty. And he seems to have no interest in upgrading his reviews in return for advertising cash, so he could teach his peers a thing or two about journalistic ethics.

However, I have a nagging (wagging?) feeling that Edimbrugh Fringe Dog’s writing style is ersatz; that he can write perfectly well and is just being cutesy to endear himself to the humans. I know that it’s natural for small dogs to want to be friends with everyone and to live entirely in the moment in a hysterical fit of unrestrainable enthusiasm, but this is the Fringe for goodness sake. There are political issues to consider, and this sort of behaviour is degrading not just to this dog but to all dogs. I know dogs who spent the whole of last year’s Fringe in a NO MORE PAGE 3 T-shirt. Have you seen Page 3 of Modern Dog? It’s nothing but a filthy anachronism.

I would give Fringe Dog no score at all. However, my colleagues disagree with me and have cut a hole in my bottom with a Stanley knife. I am leaking a steady stream of tiny polystyrene beads and I feel very weak and groggy and they say they won’t help me stitch myself up until I give Fringe Dog five pigs.

I expect five pigs are of little use to him so I’m giving him five bones. 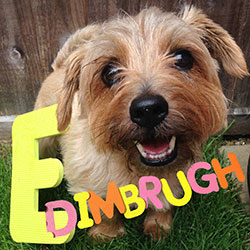