This reviewer has, apparently, “been a fan of the Fringe ever since the age of 14, after stumbling upon it during a long journey from Argyll to England”. One senses that something is missing from this story, such as “as his mother desperately scoured the country for a school where he wouldn’t be bullied”. Perhaps his parents were trying to reach the border on foot before Mr Salmond has it closed. Looking at his photograph, in which he seems to be holding a gin and tonic and pointing at the camera as if to say “No, YOU da man!” he can’t be much beyond 14 now.

It’s important to get a handle on novice reviewers, and novice Robb certainly is. Any reviewer who comes straight out of the traps with a five-star review hasn’t been long in the game, and I don’t care whether they went to see a puppet show or the second coming of Christ. Yet Robb betrays himself a little here: “This improvised story-book adventure… is a sell-out once again,” he tells us of Aaaand Now For Something Completely Improvised. Again? What, on top of their first Fringe show all those hours ago? This is the first day, after all, that Three Weeks has posted any reviews. Again after last year? Please explain. Have you seen them before? Are they your mates? Are they your family, trying to earn some coppers to pay off a human trafficker? What’s going on, George? “They appear flawless,” he says, in a review that seems to sweep him up in hysteria. We believe him, of course, but we’d like to know, to put it in legalese, the extent of his relationship with what he’s looking at.

Thankfully, Robb has found, within the cramped confines of a Three Weeks review, the space to swing a simile: “Watching Rhys James is like being attacked by a swarm of flies – his punchlines surround you in an indiscernible flurry, slightly annoying but also pleasantly tickly.” I came out of this allegory like so many people come out of shows: I can see what he was TRYING to do, but I wasn’t sold. Alas, swarms of flies are never “pleasantly tickly”, and to suggest that they are you need to be either quite eccentric or some sort of enormous pervert. And I am sure that Robb is neither of these. He’s not nearly old enough to have turned either that bad or that interesting. 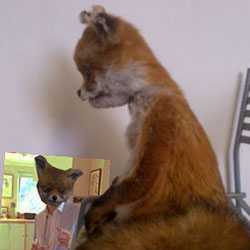