True, we have no evidence that it’s the same Barrie Morgan. In fact we desperately hope it isn’t. Just imagine being in something that creatively bonkers and then turning up (in a thunderstorm, I imagine, dressed in sodden rags) at Steve Bennett’s house, saying “I want to watch stuff and say it’s too creative and excessively bonkers. PLEASE, Steve. You owe me.”

Whoever Barrie is, the pressure’s on him to deliver for Chortle. Jay Richardson is writing for everyone BUT Chortle this year, Bennett’s young striplings have been tossed overboard (because of their low Fringepig ratings, we have no doubt) and he and Julia Chamberlain are up against it, probably fighting back the reviews like Jill and Chris dispatching Zombies in Resident Evil (That’s a game, by the way, Chortle. I thought I should explain as you have no young people left.)

Morgan sets out with a steady hand on the tiller, following a review-by-numbers style. He progresses from a brief biog to the opening to the show progression to the roundup.

So far so normal. Yet there’s something about Morgan that seems to be coming from 20 years ago. First, he complains of the “blurred reason behind the show” that is Simon Munnery Sings Soren Kierkegaard. Morgan doesn’t seem to get that Simon Munnery singing about a Danish philosopher is the entire, perfectly clear, reason for its own existence. And it shouldn’t escape Morgan that Kierkegaard was the first existentialist philosopher. Plus, if Morgan is going to say “Yes but WHY?” at Fringe shows he’s going to be very frustrated before the season is out.

Similarly he explains that Carl Hutchinson supported Chris Ramsey on a big tour. He chides: “Hutchinson must up his game of [sic] he wants to progress beyond being a perennial support act”. Yes, imagine only ever opening for a big star on a big tour. Must be shit. I’m reminded of Mark Steel talking about when teachers used to say “Pull your socks up or you’ll end up driving a van”. Kids today would say: “Wow, really? Is it my VERY OWN van?”

There’s a similar lack of guile when, in another review, he tells us: “The highlight is a longer section about a recent trip to Amsterdam where [Jo] Caulfield recalls the loss of her writer’s notebook, the wealth of random ideas scribbled therein only reinforcing her stature as a prolific and proficient writer.” You do know that not everything comics say on stage is true, Barrie? You half expect him to write “I’m surprised she made it at all – some really strange things happened to her on the way to the show tonight.”

It’s difficult to know what Morgan wants exactly. “Year after year, show after show Jo Caulfield pulls in a crowd and entertains them in her world,” he says, going on to say that her latest opus does just that again. In fact he hardly says a bad word, concluding that “you wouldn’t expect anything else from Caulfield.” The three-star rating suggests that Morgan isn’t a fan of weathered professionalism.

Oddly enough, he likes Angela Barnes because she is just as good as “a comedian in their tenth year”. One has to conclude that Morgan is one of those parental reviewers who give out stars as reward and encouragement, rather than as straightforward assessment. I’m sure they’re both worth a four, but we all know that Caulfield doesn’t need any encouragement.

Although his reviews are plagued with the typographic cack-handedness we have come to expect from Chortle, happily Morgan never takes a flight of fancy – all his reviews are done with both feet firmly on the ground. There’s some bons mots though, such as Munnery being “a seasoned veteran and an assured driver for such a heavy vehicle”.

Morgan is an assured driver himself. He’s already writing reviews that a reviewer in their second year would be proud of.

Barrie MorganWriting for CHORTLE (Reviewed in 2014) 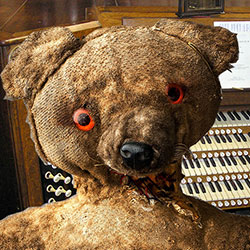