this is an article from 2017Where Are You Coming From? Stuart Black/John Robertson

This article was first posted on Friday, August 4th, 2017 Filed by Mister Kipper 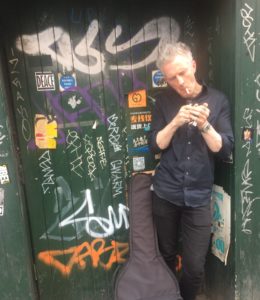 “My dad drank a bottle of whiskey a day. He was never violent but you always had the feeling he was about to go off on one. Marc Maron has written the perfect bit about having to be the grown-up to your own dad, and it really was like that. I spent my childhood trying to break the tension with stupid jokes. It was like that every day; just trying to defuse situations.

I failed all my exams and ended up on the dole in Brighton for four years. What money I had was spent on booze, ecstasy and LSD. At one point I didn’t wash for six months and when I finally had a bath the skin kind of came off in rolls. Sort of like dissolving tubes. It wouldn’t go down the plughole. It looked like half a pound of brown rice.

“Eventually I got a job screwing the lids on bottles of dog shampoo. Then I was taken on by Hill Samuel the jewellers and eventually I worked my way up to being a diamond valuer. Eventually I got my shit together enough to buy a copy of Programming For Dummies and got a job with Microsoft. But I was still very much a functioning alcoholic.

“The one thing I had was a house in Cambridgeshire. My mum begged me not to sell it. But I did, and moved to South Africa to get wasted, basically.

I was playing my own version of Nicholas Cage in Leaving Las Vegas. Except that my Elizabeth Shue was a guy called French Dave. I don’t know why he was called that; he was Afrikaans. Anyway, he was psychotic. He’d lost an eye smashing a toilet. On his first day at a building site they’d told him to break up bathroom suites for rubble and gave him a pair of goggles. He said (South African accent) “Fak off. Am not a bluddy puffta!”

So, goggle-less, he battered a loo and a chunk of it took his eye out. He might have been alright if he’d gone to a hospital but he hadn’t.

“So French Dave and I hung around taking drugs and going to brothels. I talk a lot about brothel visits in my shows; I think I get away with it because they were such sad, drunken, flaccid humiliations. Once when I was too drunk to perform the lady was nice enough to spend the time giving me an Afrikaans lesson. I learned all the nouns in her room. Wall, bin, window, bloodstain…

“Anyway, I pissed all the cash away. I had a massive house by the beach and two great cars. One day I’d been up all night at a rave in Cape Town when I thought I’d go swimming. I was still wasted and got caught in a rip. I came so close to drowning. I ended up on my knees a few yards from the beach, but I had nothing left. I thought, this is it, I’m going to drown in two feet of water. Two girls were right there, playing Frisbee, and I wanted to shout for help but my fear of humiliation was stronger than my fear of dying. I told myself “If you’ve got the strength to shout, you’ve got the strength to crawl.”

“So I’m talking about the past, and the title refers to the fact that the world of our youth is gone when it’s gone. I’ve been seven years dry and don’t miss the drink a bit. I just miss being young.” 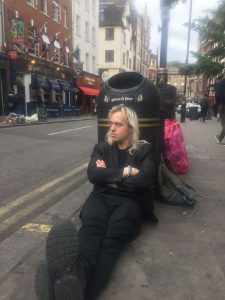 “So I’d seen a comedy show that was supposed to be true tragic stories. But it was obvious they were all lies. They were horrible little homilies that were supposed to contain some universal truth. So I thought I’d do a show where the death of my father was just one detail in a stream of fictitious nonsense, and people could take it however they liked.
In Australia the critics loved it or hated it. And then in Scotland it was “Meh, three stars” and “Yeah, all our dads killed themselves. So what?” So then I thought: “You know what, I’m done with the suicide thing now.”

“Then, in 2014, I’d just done my Dark Room show at the Brighton Fringe. I was on Mark Dolan’s radio show and for some reason I was feeding him gumbo on air. Later on I got a message that my best friend in Australia had killed herself. When I had been growing up as a transvestite in Perth, she was the one who would buy me clothes. All I could think about was that she was in deep trouble while I was shoving shit fish stew into Mark’s mouth. And this was the person who had told me to be a comedian; I’d always thought I was going to be a lawyer. She’d been a brilliant illustrator so my first response was to get one of her designs on my back. The six hours of pain, and those endorphins, were perfect. And my second response was to write Let’s Redecorate, my ‘suicide show’.

“My dad was a priest. My mum was very accepting of everything I did. I remember the first time my girlfriend and I played with razors I came home expecting her to be asleep. I was wearing a white shirt for some reason; I hadn’t realised how much I would carry on bleeding. My mum switched the light on and I threw myself against the wall like a sider and tried to edge along it to my room… all the way leaving a great bloody smear along the wall. But she just said “Don’t get AIDs, will you?”

“I’ve always thought that if you can trust someone to take you to the furthest limit of pain, and not beyond that, then that’s the most intimate you can be with someone. But the dungeon scene where I live, in London, is strange. They’re in buildings where the flat next door is a normal family just doing their thing. And whereas in Australia they’d cover the noise with metal, or maybe cabaret to make it a bit weird, in this place we had to listen to The Best of the Vengaboys. So I was once tied to a cross screaming over We Like to Party when the people next door start thumping the walls.

“So now I sometimes have shows where everyone is either dealing with grief or is a bondage weirdo. I know those people so well now. I once had four massive skinheads, one of them slightly smaller. That guy would look anxiously at the others and only laugh when they laughed. I said to them ‘I bet you all p*ss on him, don’t you?’ After the show one of them came up to me and said ‘You’re right. He’s our p*ss pig’.” 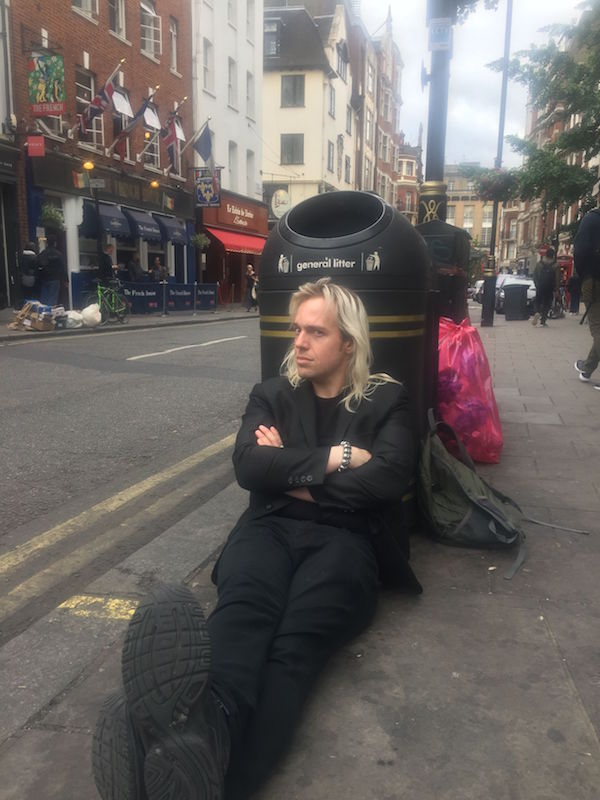