this is an article from 2016Theatre Sectioned

This article was first posted on Saturday, August 6th, 2016 Filed by Mister Kipper

Macbeth With Fish Stuffed Up Our Arses
Assembly Poxy, 16:00 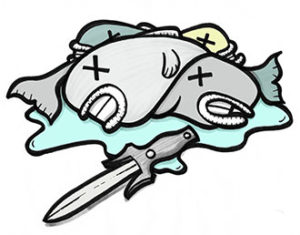 As always, Fringegoers this year will have a cornucopia of Macbeths to choose from. There’s the Modern Macbeth at the Concrete Hardbastard Theatre, or Maccie B’s N Txtspk at the Fluffy Warehouse, with its iconic rendering of “Is shankICB4I fam??” After having Banquo slain, the Thane of Glamis underscores the malady by texting “pwnd” to the dead man’s phone.

Neither is it new to see a carnivalesque play on the nether regions. Theatre fans will recall 2011’s Macbeth In Which Everyone Has Sex With a Haggis, a production that really restored to the Scottish play its earthy, pre-Union clannishness and proved that the work, like the sheep’s stomach, could keep its form despite the most violent traducement.

In short, Macbeth With Fish Stuffed Up Our Arses is a pisciverous delight. Running at just one hour and 52 minutes (a record by 50 minutes), the garbled, pained dialogue and the apparent urgency with which the players wish to remove their scaley back passengers speaks tracts about the  discomfort of the human condition. Or something.

Look Back in Anger Whilst Needing a Wee
Glummerhall, 19:30

This isn’t the first time micturition, and our ceaseless need for it, has found expression on the stage. Who can forget Ash Dutchelmdisease’s production of The Secret Garden After a Five Litre Bottle of Lemonade, a powerful piece of feminist speechifying that turned a watershed piece of literature into a watershedding piece of theatre at Edinburgh’s Dirty Pocket Rep in 2009.

There, the incontinence was a poignant remark on female sexual release whereas here we have the social upheavals of postwar Britain expressed in all their pressing immediacy. By removing the bathroom from Osborne’s work, director Rowan Poplar has brought that kitchen sink back into focus.

As Jimmy crosses his legs in agony and Helena (Maple Beechbirch) gestures towards a toilet that is no longer there, the long-suffering Alison (Juniper Hornbeam) delivers the line “Oh, don’t try and take his suffering away from him — he’d be lost without it”. At that moment, the compromises Jimmy must make are as clear as his compromised dignity. There wasn’t a dry eye in the house, nor board on the stage, and we must  contend that the human soul, like the human bladder, can only hold in so much. Or something.

Note to American tourists: None of this is real. Please don’t go looking for these shows.
We just made them up. Although you will probably find something a bit like this in the brochure. 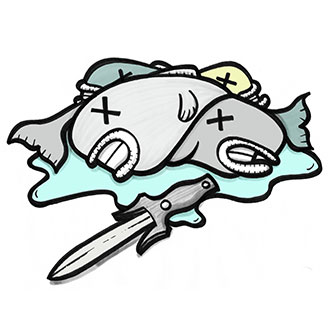