this is an article from 2016Me and My Flying Toilet

You might think it’s a difficult life being a press critic. You have to wear a lanyard. You have to spend literally minutes typing up your reports every evening. You have to look at yourself in the mirror. But you may not know that the job also involves flying over Edinburgh on a magical toilet, happily crapping on people’s dreams! Fringepig has spoken to three top critics about the state-of-the-art critical conveniences that help them deliver lofty, messy judgment on the Fringe. 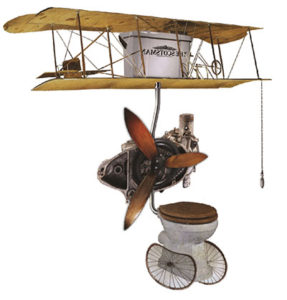 Kate Copstick’s Shitemoor 500
“My Shitemoore has been with me through thick and thin. It’s old, it’s knackered and it’s not very nice to look at but, fuck me, did it deliver a payload back in the day.
I remember back in 2006 when I dropped a truthbomb on a young three-hander: ‘I’d rather eat my own ovaries than watch another minute of their comedy,’ I said… well, the blast nearly ripped the wings off and the fallout made me slightly radioactive for years after. How I laughed!

Recently I’ve taken the Shitemoore on some slightly misjudged missions; we took a lot of flak while I was out strafing some provocatively-dressed rape victims two years ago. So these days I mostly use the Shitemoore to deliver aid ablutions to struggling Free Fringe acts in conjunction with my charity event Kate And Some Bloke Who Knew Malcolm Hardy Talk About a Festival They No Longer Entirely Understand.

The Duxford Fringe Critics Flying Toilet Museum has offered me ten grand for the Shitemoore, but I think I’ll keep it for a bit. There’s always someone who needs to cop an earful!” 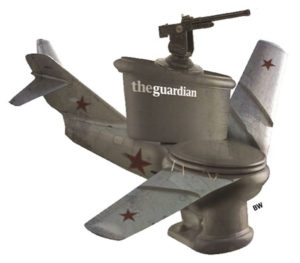 Brian Logan’s Sturmokrapovic JS-19
“Not only does the Sturmokrapvik look great, but it was made in the former Soviet Union by arrested comedian dissidents on a forced labour camp. So I like to think that the tears and suffering of those who do THE SORT OF COMEDY I HATE are well and truly built into its mainframe.

The best thing about the Sturmokrapovik is that, though it’s getting on a bit now, it can be airborne at a moment’s notice. So if any comedian, anywhere on the Fringe, suggests that capitalism might be a good thing, or that socialism doesn’t necessarily end all racial prejudice, I can be there letting rip all over their hopes of wider recognition.
The Sturmokrapovic nearly fell apart from air fatigue lately while I was dropping hundreds of ten-pounders on Jack Whitehall: he was out in the open, being all appallingly unashamed of his middle-classness. You may have noticed that my toilet has six stars on its airframe – which is the rating I would give if I could review the Stalinist purges.” 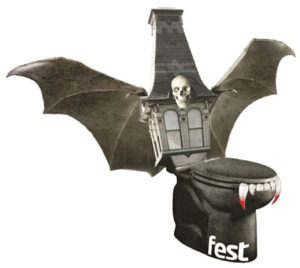 Lewis Porteous’s Guanobat k-6000
“While a lot of my fellow critics prefer speed and delivery, to me it’s a lot more about style. I like to creep up on people. I like them to hear the grating scrape of my wings like a swinging gallows cage; my pistons popping like the joints of a prisoner on the rack.

So when a comedian is standing there, foolishly doing his ‘jokes’ and making people ‘laugh’ in the insane and mistaken belief that this is a worthwhile thing to do, I want the wretched animal to hear me first and then see me emerging, as inevitable and unreasoning as death, through the mists of their fevered Fringe hopes.

Lately I’ve been hitting the wrong targets because of my penchant for seeing the Fringe through shit-coloured goggles, but I find that any other sort of eyewear brings on a horrible flood of endorphins and makes me feel things.” 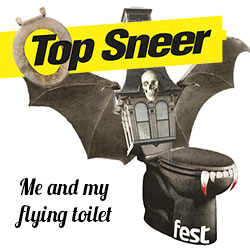