this is an article from 20187 Sensible Questions with Felicity Ward

This article was first posted on Tuesday, August 14th, 2018 Filed by Billy Coconuts 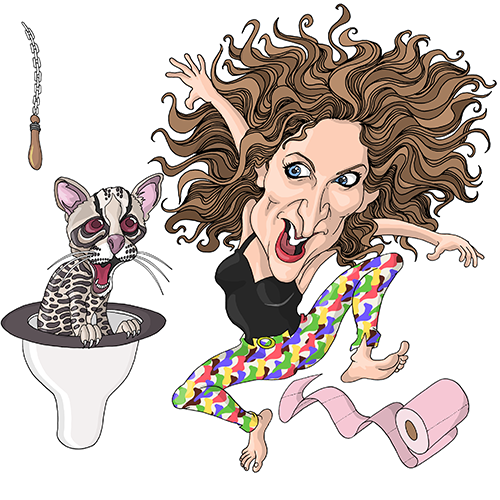 1. So, you went and got married apparently. What’s that like? I know you’re a feminist so did you make him pay a dowry or something? Does he have to make you salads?

I did get married. Don’t worry, he’s on a full salad scholarship.

2. That flight from Australia is really long. What fun activities help you pass the time?

I used to watch movies and pretend that I was going to do work but actually just spent most of the 24 hours trying to find a position comfortable enough so that I don’t want to hurt the person next to me. But now I just keep real still for the whole time after I had a “loud speaker incident”. Apparently not everyone wants a live reading of The DaVinci Code in a Mancunian accent from Sydney to Dubai.

3. I would describe your act using words like ‘natural’, ‘feisty’ and “Agggh!”. But is there a pre-gig ritual to get in the zone? Is there animal sacrifice?

There is a sacrifice, but it’s usually in the toilet. I’m saying I have Irritable Bowel Syndrome, and anxiety which exacerbates the fear of such an attack. I’m a real barrel of laffs.

4. What is the best banana you’ve ever eaten? Paint me a picture.

I was hungry. It was…there. Every banana is a miracle.

5.Unlike baboons! Do you have baboons back in Australia? I hate baboons. What animal do you think is a dick?

No baboons. Only in zoos. And you’re right: baboons are real dicks, mate. Bad attitude and a hideous butt hole. Why do they show us all the time? It looks like a rooster’s gobble. But on a butt. I think most animals are better than people but I’ve just found out that the margay “imitates the sound of a baby monkey in distress” to attract its prey. That’s dark, mate. Margays are going on the list.

6. That is truly appalling. I too will no-platform margays. Now, I know this question has been asked too many times, and it always makes people roll their eyes, but are male feminist comedians actually funny? Should there be more than one of them on each panel show?

Look, I think it’s important for representation to have male feminists on, and because they haven’t been around that long it’s going to take time for them to be as funny as real feminists. But I think they’re really brave giving it a go in such a female feminist-dominated industry. I’m sure they’re getting exactly the same money as me so I’ll never query that and just assume their experience is the same as mine.

7. We usually end on a shag, marry kill question. Obviously you’ll have to pretend you’re not already married or polygamous or something. So: shag, marry, kill: an emperor penguin, that Nazi monkey out of Raiders of the Lost Ark, and Ian McCulloch from 80s band Echo and the Bunnymen? Show your working out.

I’d marry the emperor Penguin. Always impeccably dressed. Kill the Nazi monkey. Although it would break my heart to hurt a monkey, Nazis must be stopped. Especially Alt-Right monkeys. Shag…shag…I’m sorry, I’m going with my husband here. Even hypothetically, Ian is nearly 60 and I was neither here nor there about the music of Echo and the Bunnymen.

Well that’s a shame. I always felt the Nazi monkey just needed the guidance of a kind and patient spouse. Nonetheless, thank you Felicity!