this is an article from 2018Becky Fury

This article was first posted on Saturday, August 18th, 2018 Filed by Mister Kipper

If there’s a funnier boy-girl ex-crusty libertarian hedonist insurrectionist at this year’s Fringe, then… we haven’t heard 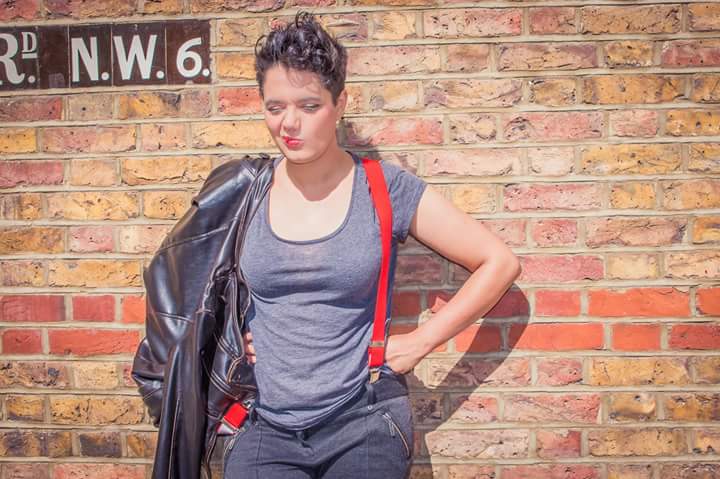 “This year’s show can’t be any worse than last year’s. The people from the Last Minute comedy awards turned up at the actual last minute due to a sudden venue change. It was almost tragic. But maybe that’ll be my background sob story when I win Britain’s Got Talent.

“I’ve always wanted to be a comedian, I was always funny at school but then I took a shit ton of drugs and I became funny in a different way; not necessarily comic. I lost all my sharpness. So I stopped that and started taking it seriously.

“Arthur Smith gave me a Smithy once, but I’m not that interested in getting awards and stuff. I don’t want to be taken under anyone’s wing. Obviously there’s things you have to aim for, like being on telly and making lots of money, but I’m in it for love; to polish my turds and present them to an audience!

“I’m a libertarian, I’m a comic and I’m a woman who is politically aware, which I feel makes me a feminist. But it’s complicated because I don’t identify with my gender and I never have. When I was a kid I identified as a boy. My mum wanted to take me to ballet lessons wearing a frilly pink tutu; I just wanted to go to football, but keep the frilly pink tutu – so we came to a compromise and I went to ballet lessons in football boots. You should have seem some of the tackles I pulled off! I was a reverse Billy Elliot.

“My feminism comes from the fact that I now identify biologically as a woman, so people SEE a woman and I experience all the prejudices that women do. Gender-wise I identify quite strongly with the masculine. And I really like men; I really like men as friends.

“It’s difficult to have male friends as a woman though, isn’t it? I’ve always had a lot of them and I assumed we were just having fun like lads together, but when I became an adult I realised I’d ‘friend-zoned’ them, to use the term for that terrible hinterland you put men in when they’ve tried to sleep with you and failed!

“I still get a kick if people mistake me for a boy, and that’s my internalised misogyny I suppose. We should never conflate gender with biological sex, but I find aspects of the transgender movement concerning sometimes. As someone who used to identify as trans as a kid, I now feel glad that I didn’t let myself get pushed into decisions that I may later have regretted. That huge pressure to be either male or female is a reinforcement of conservative values; I mean why do people need to tick one of two boxes? My body is female, my gender is much more masculine – that’s fine, I’ve just got to get on with it, and be weird, and exist in a world that is trying to make me conform to a binary. I’m fine in my own space.

“I’ve been a libertarian since I was 20, and that was about anarchy and autonomy and hedonism, but I got out of the ghetto – literally – when I realised I was having the same conversation with my libertarian squatter friends over and over again. I wanted to talk to different people and re-engage with the world outside of squats.

“Much of that world is gone now anyway; the freedoms and the spaces we had to live and think in are gone. It was amazing to grow up like that, and I don’t know what there is now for young people. I don’t know where they go to find their space.

“What’s infuriating to me at the moment is the swing towards right-wing thinking. We need to understand what revolution really means, and it’s a failing of the left that right-wing conservatism has started to look like the more exciting option. When I was a kid people used to rebel by going to Glastonbury, and now they rebel by joining the Alt Right. Well looking at the lineup for Glastonbury last year, I think maybe we shouldn’t be surprised.

“Comedy is a bit of a boys’ club, but I’ve always liked being in the boy’s club – and turning it into a big old friend zone!”