The problem with Will Young – and it’s not a terminal problem – is his apparent need to assault everything he looks at. He’ll attempt to establish an ideological standpoint, frame a performer’s whole existence or tie the whole show up into an epithet. Until he’s got his performer helpless and hogtied, Young does not feel comfortable approaching their work.

For example, he either wilfully ignores or woefully misunderstands Stuart Goldsmith’s first joke in order to make a weak point about the show in general, a fractured foundation he then builds upon. Brennan Reece’s use of a false Jongleurs-style opening to his otherwise weighty material makes him “a bit of a conman”. There may be more imaginative ways of embarking on Mark Watson’s I’m Not Here than by stating words to the effect of “He definitely is here, I saw him in the lobby”. And, in order to take on Nath Valvo, Young first embarks on a straw-man rant about what (I can only assume) he thinks Valvo believes, or perhaps it is meant to convey what other reviewers believe, or what we might believe were Young not there to give us guidance:

“Have you ever noticed how no debut comedian ever has anything valuable to say? Aren’t they ALL awful, shouty, brash white blokes finding ways to embarrass audience members as a distraction from limited observational material? Isn’t EVERY SINGLE ONE a sad disappointment for a hopeful audience risking a new act?”

I’m still not sure what that was all about, but it was almost certainly unnecessary. Still, at least once Young has his subject under wraps he delivers some decent reviewing. “It’s not for everyone, and it’s little more than the sum of its surreal parts” he says of Alison Thea-Skot while, commendably, enjoying her show to the full nonetheless. By the time Young gets to discussing Watson’s passport routine, “a rich vein to mine his own neuroses, with engaging diversions into his family life and views on modernity” I’d almost forgotten his other transgressions. When you can distil a performance this efficiently, there’s no need to go at it with a semantic pickaxe.

Comments on Will Young

Will YoungWriting for FEST (Reviewed in 2016) 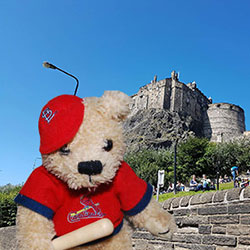