this is an article from 2018ANDREW MAXWELL

This article was first posted on Thursday, August 23rd, 2018 Filed by Editor

This year, Andrew Maxwell is getting to grips with Brexit, the Kremlin and the social-media brainwashers. 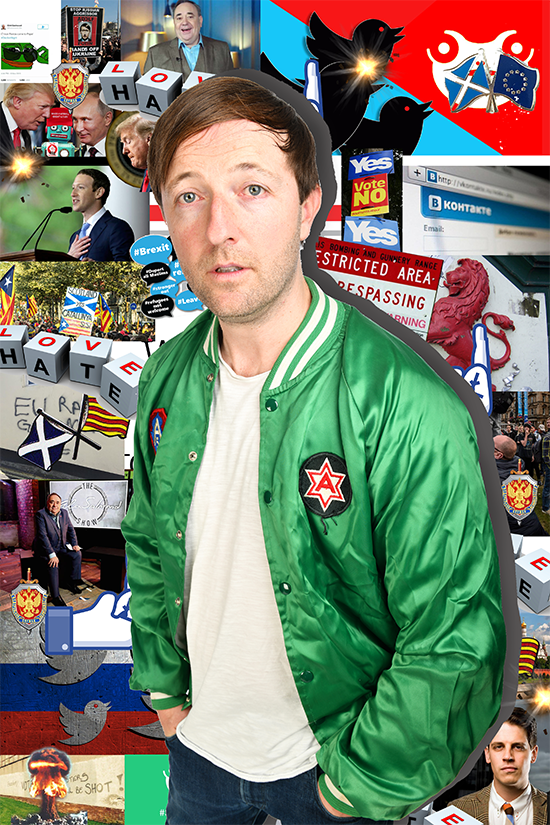 “I used to talk about the SNP, but they’re not particularly relevant now, are they? They’re way past their peak because a lot of things have gone wrong under their watch. And in the meantime Alex Salmond has been taking money – as in, LITERALLY taking money – from a Russian propaganda outlet that is planting the seeds that’ll f*ck over democracy; and that has really put all his BBC-baiting in context.

“I just feel that nationalism, of any kind, is divisive by its very nature. A lot of people said ‘But this is progressive nationalism’. Well that might play really well at your dinner party but on a street level it means somebody getting punched outside a chip shop. The language of the Yes campaign was the same language as the Leave campaign: Don’t worry, it’ll be fine, everything will carry on and we’ll all still be friends. Well, you cannot break up an alliance – be it a trade agreement, a political union, a marriage – and still be ‘friends’. It just doesn’t happen. It’s a complete lie and it always was.

“At the very best, you’ll be rivals. More likely it’ll be a shouting match and possibly a shooting match. That’s just human nature. When two sides who used to be one say ‘I’m this now, and you’re that’. It becomes violent. Look at human history. It’s a series of people getting beaten up outside chip shops!

“We’re all talking in own silos, though. Everyone I knew in Glasgow thought the whole of Scotland felt like Glasgow and they really just couldn’t believe the referendum result.
“I’m talking about that kind of thing in a wider sense this year; the blind spots in which people come to astonishing conclusions.

“So I’m going to unpack Brexit a bit, and talk about this internet culture that is f*cking us over. We’ve seen election after election now where populists have won, and it’s all actually being done from offices in St Petersburg. People are just off the scale with the stupid ideas planted in their heads. I got arrested in Area 51, essentially because so many people think it’s an alien prison and I wanted to show them it’s just a f*cking airforce base. I mean, we all make mistakes. But there’s so much stuff happening all at once now, and it’s scary.

“Nobody in Government understands, even now, how powerful Facebook is. How much engagement and virality – plus just utterly rabid greed – has put them beyond anyone’s control. I mean, there is a shitstorm of antisemitism now. And so much of it is happening on the platform of a young Jewish man. But none of these people care about that. They don’t care about anything except growing their f*cking platforms. Facebook makes it so easy to attack democracy. I mean, the Facebook ads that pushed the Leave vote to victory, right – they were SO effective, and they were placed for £30,000. Russia couldn’t keep one spy in London for that: it wouldn’t have paid for his accommodation. And it’s all running alongside this nihilistic narrative of “You can’t trust your MPs”… and Salmond of course, who kind of proves that point, telling us we can’t trust the BBC.

“There’s this idea that all information is equal, or equally rubbish – people saying proudly ‘I don’t read any newspapers’ as if that somehow puts them above making bad conclusions. No! Read ALL the f*cking newspapers. It would take less time than sending memes to your Facebook friends, and actually make you a worthwhile person.”

Andrew Maxwell: Shake a Leg is at Assembly George Square Theatre [8] at 21:00 until Aug 26th 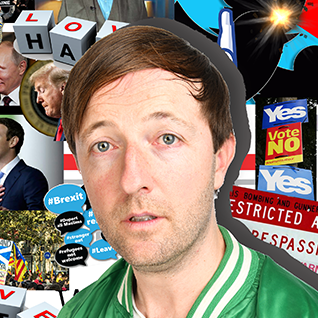