this is an article from 2016Ham Fist: The Winners

This article was first posted on Friday, August 26th, 2016 Filed by Mister Kipper

The Ham Fist Awards were announced last night to (as tradition dictates) a bus full of drunks all unsure what they were doing there. As well as the main cash prize for recipient of the Worst Review, there were additional prizes for the Most Ferociously Politically Correct Review and a prize for the person who had most managed to Lose Friends and Irritate People.

Cash pledges to date on Fringefunder.com stood at £225. Generous (and drunken) pledges on the bus took the total to £250

Reviewing is how a lot of students and young people like to show how politically correct they are. The opportunities for seeing something laddish or boorish at the Fringe are numerous, and so are the opportunities for reviewers to point out that they absolutely, unequivocally disapprove of that sort of thing. The chances to hitch your wagon to something that flies the flag of Liberal Received Wisdom is equally compelling.

Here are the entries, as compiled by Fringepig staff:

Nina Keen’s body of work suggests she is a zealous lieutenant of what is and is not allowed in comedy, and we could demonstrate but a fraction of her purges…

“Michelle Wolf has retro misogyny and homophobia, with a dash of transphobia and ableism thrown in. This is confusing, because I could’ve sworn we’d established this was unacceptable ages ago. … Adam Rowe “used his own weight to justify a fatphobic routine that was at the expense of others rather than himself”.

Laura Baigrie, One4Review: Andrew Lawrence: Hate Speech: “I do think suggesting that people with depression or suicidal thoughts should follow through definitely isn’t okay. – 4stars” Still kind of ok then?

“Throughout 2016, it seems, women are slowly taking over the western world. Teresa May owns the UK, Clinton should take the States, Merkel dominates Europe & in the world of comedy, the Mumble has noticed that the best comedians at this year’s fringe have been, in the main, female. Last night I saw the veritable queens of these amazonians – a couple of intensely brilliant feminazis who strut onto stage in cat-suits barking, ‘I am woman, hear me roar! …Dangerous & dirty, brash & bolshy, wild & wicked, to N&P all men are fuck-puppets – such as those two wine merchants from Windsor – & basking in their own sexuality they portray an absolute unfloundering confidence in their comedy. A true treat.” Wonderful. Apparently women are now owning the term ‘feminazi’. Or Damian, who knows what they really want, has owned it for them. Worry not, egalitarians: Damian is in your corner. 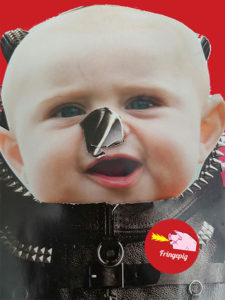 The How to Lose Friends and Irritate People Award

Nominees (as sent in by email):

Fringepig’s own Liam Mullone was hoping to walk away with this one after three years of trying to alienate almost everyone important, but on the night there was no standing in the way of the Franken juggernaut.

‘Worst review’ can be one of a number of things. It can be a review that is excessively brutal, badly written, ignorant of its subject, just bizarre or wrongly attributed. As long as the reviewer is in some way subject to righteous ridicule, then the recipient of that review is a valid contender.

Nominees (as sent in by email):

Reason: Excessive brutality. There is a real sense in this review that Fleckney is hitting the reviewee round the face with his penis, over and over again. The ‘I’m STILL only giving it one star’ bit is particularly unedifying.

“Towards the end of his performance, Dave Lemkin is trying to prize some banter out of the audience. I don’t think he wants much, just something. Anything. A sign of life. But it’s not happening. You’d find more chemistry in a hospice.

Frustrated, he starts trying to joke his way out of it, speculating about whether the audience has been bussed in from a mental hospital. It’s one of several wild swipes he makes. They’re made in jest, and they’re taken in jest, but there’s no mistaking how utterly fucked off he is with the situation. It’s pure Brent, insulting your audience when the gags bomb.

The weakness of the material and the amateurism was such that I have no choice but to give this one star. At one point he even brought out a puppy – an actual, live puppy – and it’s still getting one star. Have you any idea how much I like puppies?”

Reason: Ignorance of the subject. Ed has been doing shows here for a decade. Several people replied to the nameless review-tweet (and how is THAT allowed to be a thing?) that this was criticising Ed Aczel for being Ed Aczel. As explained on stage by Ed Aczel. He also pointed out that his name was not, and had never been, ‘Eddie’.

“Eddie Aczel’s Foreign Policy. Ill-prepared and so bullies his audience for an hour; doesn’t seem to know foreign policy or any good jokes. 1/5” 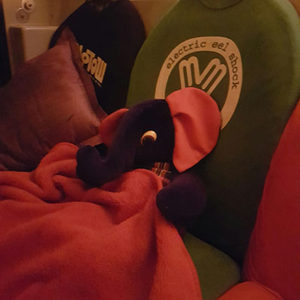 This review is just wonderful. Read it, and then read it again. A show that was too good for its own good. That made the reviewer FEEL TOO MUCH. Enjoy.

“Britney? Britney? Britney? ‘Why was this comedy show called such a thing?’  I really wasn’t sure what to expect when I turned up for this one. Eventually I eventually discovered that the show is in fact about a brain tumor, & well, we were all now supposed to see the funny side – that laughter is the best medicine.  The story is not all doom and gloom… it is a pilgrimage of hope, friendship, survival and love. It is about saying we should feel OK to speak about Britney and not to feel bad about it. Britney is a fact of life and she touches far too many of us. There were awkward moments for me as I watched, but this is the price of being confronted by brave, nerve-jousting comedians.

Saying all that, however, I am very glad I went and saw them two girls in action… they have an incredible amount of talent, tons of depth, an endearing spirit and a very bright future. I did connect with the story probably a little too much for my liking and had a few tears in my eyes at the end. The problem was the Fart Twins – as the girls are more commonly known – were good, very good in fact! Hard not to like and very easy to connect with. Would I go back and see these girls again… yeah for sure! But for me, Britney was a touch too powerful.” (THREE STARS.)

We feel bad about this because Arts Award Voice is a website aimed at getting unintelligent young people engaged with the arts, aided and abetted by grown ups who should be arrested for inciting minors to criminal behaviour. But this IS very funny. It’s a review of Tim Renkow written by a reviewer who was actually watching Paul Currie in the room next door. Note: Paul Currie is a very funny, very physical absurdist comedian. Tim Renkow is a hilarious practitioner of deep, dark humour largely on the subject of his own cerebral palsy. The mash up of th etwo made this a clear WINNER:

“To describe Tim Renkow as a funny comedian would not do justice to the performance he gives at Edinburgh Fringe’s Heroes @ The Hive. Tim goes above and beyond in his latest show, King of the Tramps.

The Hive is a space which cannot produce a full black-out because of the ceiling lights, and the level of creativity was impressive. He had two sticks with boxes at the end of each and had myself and another audience member hold them above the lights to create his desired black-out so that he could fly onto the stage for his entrance. Confused? Well imagine a mini figurine of himself at the end of a stick, lit by a flashlight, flying through the audience as his way to the front – now that’s how you make an entrance.

From the get go it was a brilliant show, from his ridiculous lip-syncing to swallowing the background music and slowly farting it out. There were too many hilarious moments.

King of the Tramps has a series of different sketches where the audience can get involved. In one particular sketch, this involved playing the flute to summon a snake out of a box (the audience provided the flute noise), and it quickly turned inappropriately funny.

Other moments featured a Brazilian dancing brick and an amazing Christopher Walken impression, but the best part was a recreation of the scene in Star Wars where Tim as Yoda used The Force to pick up a rubber duck which crashed into an audience member, the guy slowly brought the duck back to the stage as Tim gestured.

If all of the above sounds ludicrous, it is. It’s also great fun and hilarious – To manage even making the task of eating cereal really funny is a win in my book. King of the tramps? More like King of the Fringe!” 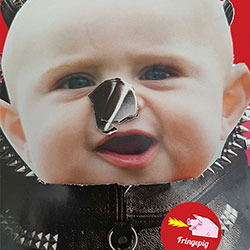