Adam Harwood won’t use three words where six will do.

For instance, he could have said: “Joe Fairbrother has a strong lunchtime show that involves his audience while keeping them relaxed”. Instead, he says “If a good, strong, lunchtime comedian is one who can involve many audience members in his show while keeping them feeling totally relaxed, then this performance certainly achieves these goals.” He could have said “He may look like a nervous, overgrown student”. But instead he says: “A long-haired, overgrown, slightly nervous looking student he may seem”.

I wouldn’t bother picking on this; there are a million valid ways to express the same thought, of course. But Harwood’s prose is so overgrown and tangled that reading it is sometimes like hacking through Japanese knotweed.

Although littered with sentence constructs that belong in a Georgian parlour (He likes to say things like “rare is it that” and “his appearance is that of” and “strange he may look” rather than just getting to the point), Harwood’s reviews aren’t too bad despite all this. He’s not too stingy with his box of stars either; most things get a four or a five, and we are left in no doubt that Harwood actually ENJOYS comedy and goes in the hope of finding something to praise rather than something to persecute.

Disappointingly, perhaps, he toes the traditional reviewer line by hating the Comedy Zone and blaming its participants for a poor evening’s entertainment, apparently not realising that the Comedy Zone is a hazing process by which Avalon tries to make young, inexperienced comedians suffer a massive breakdown before handing them an even bigger bill. You don’t need to know everything about comedy to review it, but the fact that Avalon is congenitally evil is hardly a trade secret. 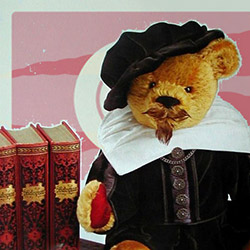